One of Feldman’s responses occurred the next morning when he brought his congregant Vera Goodkin, a Holocaust survivor and retired professor, to the high school to meet the students. Goodkin recalled the rabbi introducing her in the following way: “Dr. Vera Goodkin was about your age when her life was turned upside down and she has a story to tell.”

Speaking to NJJN, Goodkin said she has long admired the rabbi’s ability to “make everything relevant and age appropriate.”

The untimely death of Feldman, spiritual leader of The Jewish Center (TJC) for 14 years, on Dec. 24, has created a void in the greater Mercer County community.  Leaders told NJJN they felt they had lost more than a colleague; they’re mourning a friend.

“I loved his devotion, his loyalty, his wisdom, and his love, and I rise before you to give thanks to God for the gift of his life in my life,” said Reverend David Davis, senior pastor at Nassau Presbyterian Church during Feldman’s funeral on Dec. 29.

Davis met Feldman and became a longtime friend of his through their work at the Princeton Clergy Association and later the Board of Religious Ministries at Princeton Hospital.

“Building relationships with other community leaders through the Princeton Clergy Association was especially important to Rabbi Feldman,” Davis told NJJN, “so that when things happen in our community we act out of the relationship: whether threats of violence, acts of hatred, acts of anti-Semitism in the schools, or the need to gather in prayer.”

Feldman valued interfaith partnerships, which was apparent in 2017 at the start of U.S. bans on travelers from Muslim countries. “He was the mover, shaker, and organizer of vigils to support the Muslim community,” Goodkin said.

She also noted that he had a close relationship with Princeton Theological Seminary. “He would often go there and lecture on Judaism and would often invite some of the students, the future clergy, to attend our services,” she said. “You throw a pebble in a lake and it sort of spreads.”

Princeton Mayor Liz Lempert called Feldman “a friend, advisor, partner, and inspiration to so many of us in the Princeton community.”

TJC congregant Kim Marks said Feldman was a respected community leader whose ties made him an effective advocate for the Jewish community.

“The strong relationships he had with other leaders in the community meant that his phone calls were always answered, his advice always listened to, and his suggestions always incorporated,” she said. 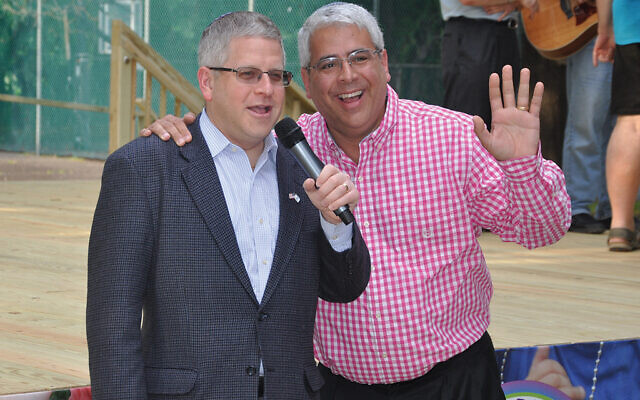 Feldman was also an advocate for the Princeton Police Department. After the High Holiday season, he would send a letter to the local papers publicly thanking the department for protecting TJC congregants at the synagogue and in services held at Riverside School.

Chief of Police Nicholas Sutter called Feldman a huge supporter “and friend to me and the department.” Sutter said the rabbi was always “here for us, not just in times of crisis, but in all types of times of need.”

Sutter said he often shared his own stresses and difficult decisions with Feldman, a certified police chaplain, and he “brought calm, logic, and perspective to situate me that I certainly didn’t have on my own.”

Feldman was a founding member in 2013 of their chaplaincy program in which trained chaplains tend to the spiritual and therapeutic needs of the officers and personnel. He also grew the chaplaincy department in the Princeton HealthCare System (PHCS) and was co-chair with Davis of its Board of Religious Ministries.

Rev. Matthew Rhodes, director of the Department of Religious Ministries of PHCS, said Feldman’s lifework was illustrated in how he could appreciate “the integrity and differences of people, even see beauty in those differences, and come together in closeness.”

Rhodes said he would turn to Feldman for guidance. During a particularly tough time he sought advice from the rabbi who told him that “difficult situations in ministry are a rite of passage,” Rhodes recalled, and said Feldman added, “it is on days like that that you really become a rabbi or a minister.”

Davis and Feldman shared a friendship with Imam Hamad Ahmad Chebli of the Islamic Society of Central Jersey in Monmouth Junction. “I miss him too much,” Chebli said of Feldman, and recalled his “warm arms and open heart.”

The three men studied texts together “to understand each other’s religion, not from the media, but from the main source: the Torah, the Bible, and the Koran” and then shared what they learned with their respective church, synagogue, and mosque, according to Chebli.

“He was instrumental in setting the direction for who and how the JCRC should develop relationships with local non-Jewish clergy and our greater Mercer municipalities,” he said.

In an email to NJJN, Steve Cochrane, superintendent of Princeton Public Schools, wrote, “I pray that all of us who knew him can continue to pass on his light, and in the face of darkness, honor his memory with acts of love and laughter, healing and hope.”