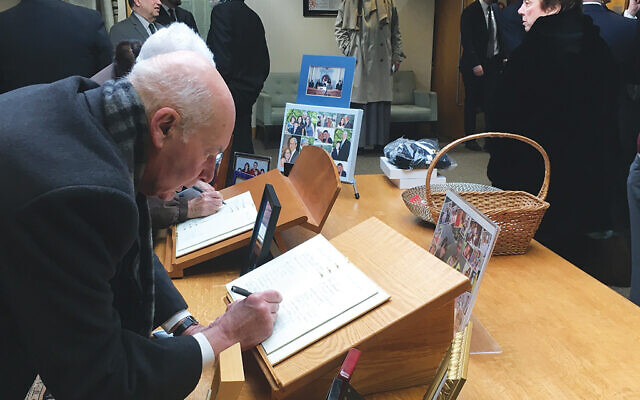 Photos of Rabbi Adam Feldman with his family were included on the table where the guest registries were placed. Photo by Shira Vickar-Fox

Sprinkled amid mourners’ dark, somber clothing were the bright red of the Philadelphia Phillies and the dark green of the Eagles. The garb was not out of place: In the funeral announcement, the family of Rabbi Adam Feldman, who died Dec. 24, welcomed Phillies, Eagles, or Sixers apparel as a “reflection of Rabbi Feldman’s love of life and Philadelphia sports.”

On Sunday, Dec. 29, at least 1,000 mourners packed into the sanctuary and social hall of The Jewish Center (TJC) in Princeton to remember Feldman, the synagogue’s senior rabbi, who died last week while on a family vacation in Hawaii. He was 55.

People stood along the walls to honor a beloved rabbi whose roots run deep in the Conservative movement and whose ties of friendship among people of all faiths run wide.

“The world is a much better place with a friend like Adam,” said Cheryl Magen, director emeritus of Camp Ramah in the Poconos, who met Feldman at the camp in 1984. At the time he was the head of sports and told Magen that while teams and equipment matter, what’s really important to him is teaching campers “how to lay tefillin.”

Magen asked those gathered to be the kind of friend Feldman was to her: “Someone whose commitment is sincere and unwavering, someone who is your conscience, your cheerleader, and your confidante. Someone who checks in regularly, who makes time for you, someone who says they value you and your friendship, someone who really celebrates your victories with you and supports your failures.” 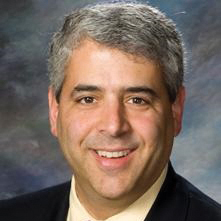 Rabbi Adam Feldman, who died on Dec. 24, was senior rabbi at The Jewish Center in Princeton for 14 years.

Rabbi Alan Lucas of Temple Beth Sholom in Roslyn Heights, N.Y., led the ceremony. His friendship with Feldman goes back decades to when they met at a United Synagogue Youth (USY, the youth group affiliated with United Synagogue of Conservative Judaism) event when Feldman was in high school in Cinnaminson. More recently, Feldman was Lucas’s assistant and associate rabbi for six years before coming to TJC in 2005.

Feldman’s death, which occurred on the second day of Chanukah, was sudden and unexpected. Lucas looked to a similar situation in the Bible when a family faced the untimely death of a loved one and instead of eulogies and lamentations, the text advised, “This is a time to be silent,” he said. “This is a time when one cannot capture in the net of language that which is in the heart.”

Yet he also noted that amidst the grief, shock, and anger over Feldman’s death, “the sense of frustration changed to one of appreciation of the special gift that was Adam’s life.” And, Lucas said, the family asked him to share that “we gather not only to mourn our loss but to celebrate what we had.”

Cantor Lorna Kalet of Congregation B’nai Israel in Millburn and Pastor David A. Davis of Nassau Presbyterian Church in Princeton also participated in the funeral. Kalet, who knew Feldman from working together at Camp Ramah in the Poconos, sang Psalm 23 (“The Lord is my shepherd…”) and Davis read the English translation, his voice choking at times.

Lucas said Feldman was a “master” at “creating relationships that are bound by love and marked with passion.” He loved being a rabbi, according to Lucas, most of all because it offered him the “opportunity to be with people at the most significant moment of their lives,” whether that was sharing the joy of b’nei mitzvah or comforting grieving congregants.

Feldman received ordination in 1999 from The Rabbinical School of the Jewish Theological Seminary. Following his graduation from Rutgers University and before rabbinical school, Feldman worked for several Jewish organizations, including Camp Ramah in the Poconos and the Berkshires, USY, and Highland Park Conservative Temple-Congregation Anshe Emeth, where he directed youth and adult programming and worked alongside Rabbi Yakov Hilsenrath, who died in 2014. Lucas called Hilsenrath “a major influence” for Feldman of “what a rabbi could be and what a rabbi should be.”

Lucas read remarks about Feldman from former TJC cantor Hazzan Joanna Dulkin, who wrote “the light of this season will be permanently diminished for those of us who love him…. He was a living shamash sharing his own light to make us shine brighter knowing that it didn’t diminish his own.”

Lucas closed his eulogy with a parable of a young boy questioning the impermanence of a Chanukah flame. He is told by an old man that while a candle burns for a short time, while it’s lit “it burns brightly and it brings light and warmth and kindness to the world.”

Feldman is survived by his wife of 24 years, Sara Bucholtz, who grew up in Maplewood, and his three children. Two daughters are graduates of Golda Och Academy in West Orange — Talia in 2017 and Dena in 2019 — and his son Ilan is a sophomore. He is also survived by his parents, Leonard and Nikki Feldman of Mt. Laurel, and sisters Lisa and Amy.

Memorial contributions may be made to The Jewish Center, Princeton Health Religious Ministries Department, or Camp Ramah in the Poconos. Funeral arrangements were handled by Orland’s Ewing Memorial Chapel, Ewing.

Related Articles:
Giving ‘thanks to God’ for the gift of Rabbi Adam Feldman
Congregants recall Rabbi Feldman as a caring leader who put community first