This view of the little red lighthouse from below the great gray George Washington Bridge is by Chaim Tzvi Schneider. See more of his work at chayimtzvi.myportfolio.com.

I am forever connected to some of the children’s books I read to my son and daughters when they were young. I could no sooner give those books away than dispose of the photo albums that tell the story of my children’s growing up years. “Goodnight Moon,” “Mr. Paint Pig,” “Where the Wild Things Are,” “Elephant in a Well,” “The Day The Babysitter Didn’t Come,” “Ktonton,” “The Cat in the Hat,” “Pig Pig Grows Up,” and “The Little Engine that Could,” to name just a few. And there was one other book that perhaps you never heard of, but I always felt connected to it because it taught an amazing lesson through a talking George Washington Bridge.

“The Little Red Lighthouse and the Great Gray Bridge,” written by Hildegarde Swift in 1942, tells the story of a small red lighthouse that stands firmly on the New York side of the Hudson River and proudly guides and protects ships through challenging weather conditions with its bright lights. The lighthouse feels very important; most of all, it feels needed. But then, one day, many men come and begin the arduous task of building this enormous gray bridge that dwarfs the lighthouse, and uses its own towering lights to guide the ships and planes. The lighthouse feels useless and cast aside.

I remember hoping my children heard the book’s message loud and clear, for it surely reflects Judaism’s teachings of loving kindness. Hannah Szenes (1921-1944), a Hungarian-born poet was a Special Operations member from Palestine. She was arrested, imprisoned, and executed for trying to rescue Hungarian Jews about to be deported to Auschwitz. She wrote the following: “One needs to believe in something for which one can have wholehearted enthusiasm. One needs to feel one’s life has meaning, that one is needed in this world.” 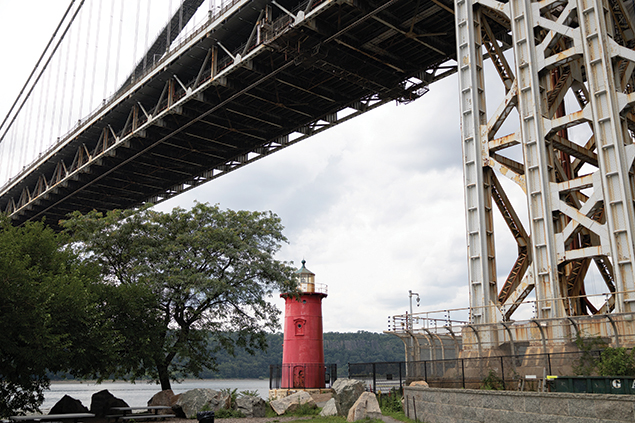 Feeling needed is a universal emotion; the Great Gray Bridge in the story understood that well.

I occasionally would mention to my husband that we should pick a Sunday and make a family outing to see the actual lighthouse. As it often happens, Sundays were generally busy; years passed, the children became adults, and the possibility of a small adventure ultimately was forgotten.

Until this past summer.

My almost 16-year-old Israeli grandson, Chayim Tzvi, whom we sometimes call CT, is an avid and — in his grandmother’s totally objective opinion — an amazing photographer. He spent three weeks in the United States this summer visiting family, which was a gift in and of itself. But the greater gift for me was to walk with CT, whose camera was often in his hand or around his neck, and have the opportunity to view the world through the unique eye of his camera. His primary interest is in photographing landscapes, nature, animals, and flowers. One day, we walked on the path along the Hackensack River in Overpeck Park. My eye saw grass and weeds and simple tiny flowers. His eye captured a bee approaching a small colorful flower, an unusually shaped leaf, the beauty of a host of white daisies.

And then I remembered the lighthouse. 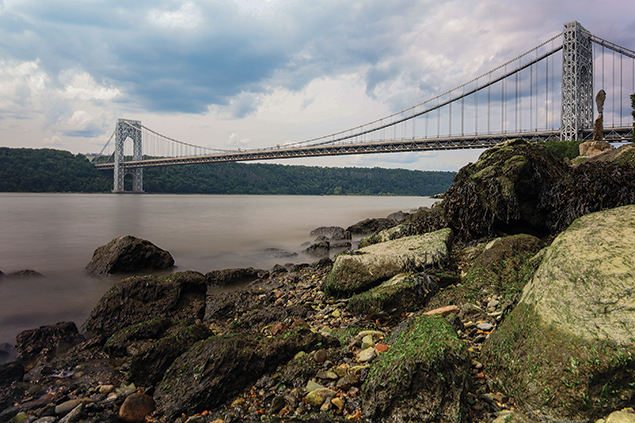 I told CT the story of the book and that I had always wanted to go and see the actual lighthouse. I presented my hope within the framework of: “Could be an opportunity for some amazing photos — the bridge, the lighthouse, the river, the skylines, the nature along the path.” Success was mine; he agreed to join me on this long awaited journey without a moment’s hesitation!

Getting my grandson to agree to go to the lighthouse turned out to be easy. Finding our way to the lighthouse was a whole other story. I researched Fort Washington Park and the Hudson River Greenway, and I thought I had it all figured out when we got into the car and I put the location into Waze. But while we still were driving the last few feet of the George Washington Bridge, Waze announced with confidence and cheeriness: “You have reached your destination!”

Not really, we both agreed as we laughed at our predicament.

And that began an hourlong journey up and down the West Side Highway and Riverside Drive, searching, searching, searching for a way to park our car somewhere — anywhere — that would allow us to get to that red spot in the distance that was our destination. Complicating our search was a sudden crazy torrential rainstorm, and so our mission was temporarily aborted. We drove home and went out for a late lunch instead. 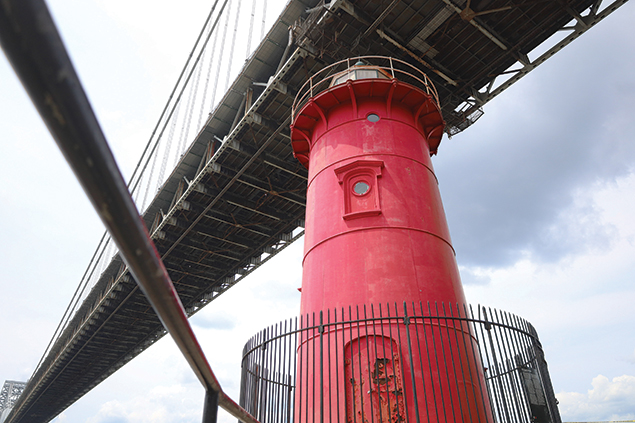 The lighthouse no longer beams, but still it stands proud and bright. (Chaim Tzvi Schneider)

Giving up, however, was not an option. And the next day brought with it a new beginning.

Leaving the car at home, we jumped onto a Route 4 jitney. (That led to a whole other conversation for another time.) The jitney brought us to the George Washington Bridge Bus Terminal at 178th Street and Fort Washington Avenue. “I’ve got to believe that the security guard at the door can tell us how to find such a famous landmark,” I said confidently to my grandson.

And that is precisely what he did. We walked to 181st Street, turned left, walked all the way down to Riverside Drive, then took the 182nd Street bike bridge over Riverside Drive down to a winding, almost forest-like path.

We walked about 10 minutes. Suddenly I was speechless, for there I was, up close and personal, as a living participant in the very visual story I had loved and read over and over again. There is a scene in the original Mary Poppins movie when Julie Andrews’ Mary Poppins and Dick Van Dyke’s Burt are walking in the park with the Banks children and notice some chalk drawings on the sidewalk. They literally jump into the pictures, coming out in the magical park on the other side, where animals sing songs and anything is possible.

That was CT and me. We had jumped together into the very drawing I knew so well. 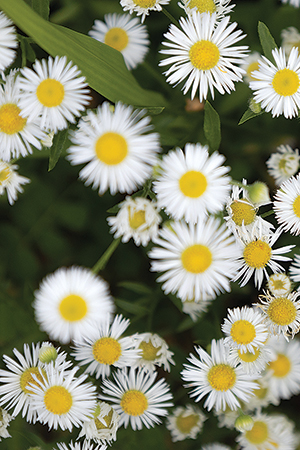 There’s much to see along the riverbank.(Courtesy Tzivia Bieler)

It felt magical. If I had written a modest bucket list in my younger years, I joyfully could have crossed visiting the Little Red Lighthouse off the list.

My grandson wasted no time in seizing the opportunity to photograph. I needed some time to process it all. My thoughts reflected a piece of what the lighthouse felt in the story, and I was humbled by the enormity and grandeur of the bridge above me.

CT and I spent the next two hours joyfully walking the Hudson River Greenway while he savored the images of the bridge, the lighthouse, the river, the skyline, the rocks, the flowers, and so much more as his photographic palette. My thoughts continued to focus on the lighthouse.

The Little Red Lighthouse originally was erected in 1880 in a different location, but it was dismantled when it became obsolete. It was rebuilt in 1921 and placed in its current location on this dangerous spot, which is called Jeffrey’s Hook. But 10 years later, the George Washington Bridge was built, and in 1947 the lighthouse’s beacon was extinguished once again.

The Coast Guard planned to dismantle and destroy the lighthouse in 1951, but the public protested. They loved the lighthouse character in Hildegarde Swift’s beloved book, and they wrote many letters pleading that it not be destroyed. In 1979, the lighthouse was listed on the National Register of Historic Places, and in 1991 it was designated a New York City landmark. 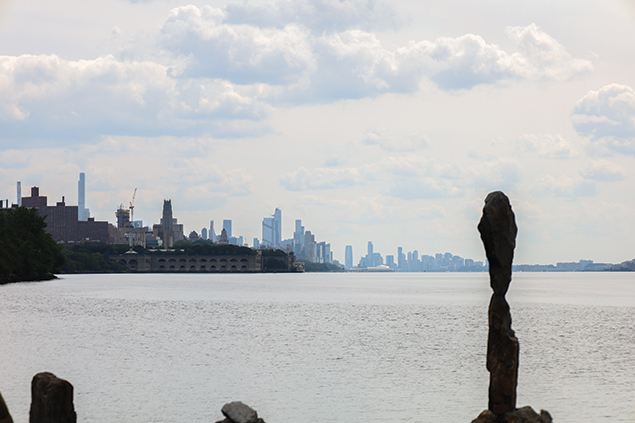 The New Jersey skyline from the New York side of the river. Chaim Tzvi Schneider)

The bigger picture of this little story speaks to me. On Yom Kippur, we recite words from Psalms during the Musaf prayers. With a full and humble heart, we ask the Almighty, “Do not cast me away when I am old. Do not forsake me when my strength is gone.”

This prayer, an integral and precious piece of our holiest day, is also a universal yearning; it most assuredly is a part of me. No one — no man, no woman, no child, not even a little lighthouse in a storybook — wants to feel cast aside and forgotten. And the largest “bridge” should always understand that.

Perhaps that explains my powerful connection to the stories my children treasured when they were little. And that is why, so many years later, those storybooks continue to sit happily on my bookshelves.

You can see more of CT’s photos on his website, chayimtzvi.myportfolio.com.