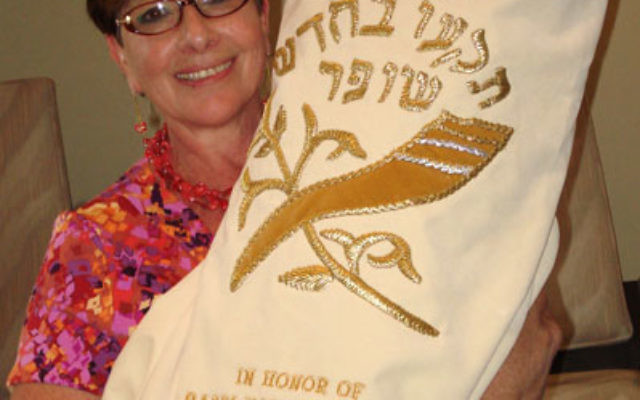 Joan Hersch, co-coordinator with Nancy Popkin of the Story Corps Project at Congregation Brothers of Israel, is considering including favorite pictures — like this one of hers — in the book version of the project.

Inspired by the National Public Radio’s Story Corps project, members of Congregation Brothers of Israel, the Conservative synagogue in Newtown, Pa., are recording anecdotes about their Jewish experiences.

Their interviewers have been very young — their own children and grandchildren or nieces and nephews. Armed with questions shaped with the help of their religious school teachers, the youngsters have elicited tales of struggle and thriving, of heroism and kindness. Some stories are of Holocaust survival; others are of immigration from places like Argentina and Britain; many reflect the ups and downs of Jewish life right here in the United States.

The interviews — most conducted at Sunday brunches held throughout the year for religious school classes — have been videotaped. The tapes have been transcribed, and the results are to be combined in a book, and possibly DVDs.

To date, 30 stories have been recorded through the ongoing project, which is being coordinated by former broadcast journalist Nancy Popkin of Newtown and Joan Hersch of Yardley, director of the congregation’s Rabbi Howard Hersch Religious School. They want anyone “who would like to add to the story of the American — and the Trenton — Jewish experience” to contact them. People can write the story and e-mail it to them, sit down with a volunteer interviewer or a member of their family and have the story videotaped, or even tell their tale via Skype.

The two women were inspired, Hersch said, by a guest speaker who talked to the congregation about the value of collecting anecdotes. She and Popkin “sat down and dreamed” until they came up with a strategy that would benefit both adults and children in the community.

Hersch told NJJN that the Sunday brunch interviews “have been an absolutely wonderful experience. The children asked such terrific questions. It really brought the Jewish experience alive for them. They got to know so much more about these people they’ve known all their lives.”

The stories have ranged from ones like her own of growing up in an area of Brooklyn where there were few Jews, to more grueling narratives, like one man’s story of how his family took a boat from England to the United States to escape the Nazi bombing, only to go back because his mother couldn’t stand living in Pittsburgh.

Hersch said that as varied as they are, the stories reveal extraordinary common threads. The project “has really shown how wherever you go, there’s someone who’s Jewish,” she said, “and that we really are connected by this global experience.”

Men’s club member Warren Baer of Langhorne, Pa., who has been in charge of the automatic video system used for recording bar and bat mitzva ceremonies, served as cameraman for the Sunday interviews, assisted by some of the older students.

Popkin said once Baer started the task, “he was hooked — as I was. We were really privileged to hear these amazing stories.”

Among them was one of a woman who was born in a refugee camp in Shanghai. Perhaps Popkin’s favorite story, she said, was told by a grandfather who recalled as a kid being beaten up by anti-Semitic boys in Vineland. Years later, as a pediatrician, he was treating a little girl and recognized her father as one of his assailants. They talked and the father said he was grateful now that they hadn’t hurt him too badly.

In a letter to congregants thanking them for their support and inviting more to participate, Popkin wrote that she hopes through the book and DVDs “generations to come will know how culture, holidays, families, and Judaism were experienced by the generations that came before them. Jewish history will come alive for our religious school children as those valuable memories are preserved. We hope our stories will be treasured by the entire Jewish community. Everyone has a story and we want to hear them!”

People interested in being interviewed can call the synagogue at 215-579-2200, or send their stories to Popkin at nancypopkin@prodigy.net. She and Hersch would also like to hear from people who can help coordinate the publishing and marketing of the book and DVDs.