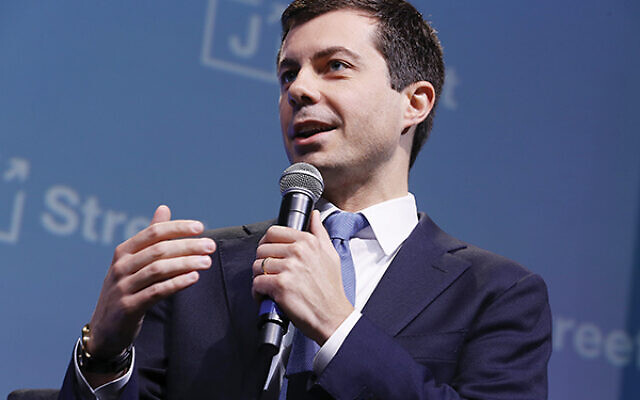 Even as Democrats tried to downplay their concerns, some Jewish observers worry that three top candidates for president who said they would impose conditions on U.S. military aid to Israel reflect the party’s future.

They worry that the front-runners are taking their cues from party upstarts in questioning an aid package that traditionally has drawn unflinching bipartisan support.

A leading Reform rabbi, Ammiel Hirsch, spiritual leader of the Stephen Wise Free Synagogue in Manhattan, issued a statement in which he “expressed alarm at the encroachment of anti-Israel sentiments in the Democratic Party.”

“Just how widespread and deep the anti-Israel animosity is in the Democratic Party is hard for me to gauge,” he told NJJN in an interview. “What is important is that we have a roadmap of what that kind of thing does in the long run — and that roadmap is the United Kingdom’s Labour Party.”

He was referring to widespread accusations of anti-Semitism leveled at party members, which led the British Jewish Labour Movement to announce it would not campaign in the upcoming election for Labour Party leader Jeremy Corbyn, who is often accused of making or indulging anti-Semitic and anti-Israel statements.

At the recent J Street conference in Washington, two Democratic candidates — Sen. Elizabeth Warren of Massachusetts and Mayor Pete Buttigieg of South Bend, Ind. — proposed leveraging American military aid to Israel if the Jewish state were to annex the West Bank, something Israeli Prime Minister Benjamin Netanyahu has promised to do.

And Vermont Sen. Bernie Sanders, speaking at the same conference, said that if elected he would tell the Israeli government: “If you want military aid you’re going to have to fundamentally change your relationship to the people of Gaza.” He promised that on the first day of his administration he would divert some of the American aid from Israel to Gaza “because we have a right to demand respect for human rights and democracy.”

Four other candidates rejected the idea of leveraging aid, including former Vice President Joe Biden, who said “it would be absolutely outrageous” and “a gigantic mistake” to place such restrictions on aid to Israel.

In an interview, Hirsch said he welcomed Biden’s rejection of the suggestion that strings should be attached to American military aid to Israel.

The comments of the three were quickly pounced on by the Republican Jewish Coalition (RJC). It claimed “the radical left has taken over the Democratic Party, and now they are moving to undo decades of bipartisan support for America’s critical ally.”

In a Nov. 4 tweet, the RJC said that it had just launched its first online ad of the 2020 campaign, called “Shanda,” or shame in Yiddish. It said the $10 million media blitz would be running in battleground states, targeting Jewish voters during the next two weeks in Ohio, Florida, and Pennsylvania.

Halie Soifer, executive director of the Jewish Democratic Council of America (JDCA), stressed that both Warren and Buttigieg were speaking not about settlements but annexation of the West Bank, something she said virtually every American-Jewish organization opposes because it would “permanently impede prospects for a two-state solution.”

“We are speaking in hypotheticals,” she stressed. “No one is proposing blanket aid cuts to Israel, and the two said their comments were predicated upon Israeli annexation of the West Bank.”

But she added that her organization does “not support conditioning or reducing assistance to Israel. We strongly support the [aid package] negotiated by the Obama administration.”

In a Facebook post, the JDCA insisted that the RJC’s ad “won’t work” and noted that since Donald Trump became president “Jewish support for the GOP has been halved because Trump doesn’t share our values, and Jews know the real shanda is in the White House. Jewish voters are both pro-Israel and three times more likely to support Democrats, because Democrats’ policies align with our values on a wide range of issues, including Israel. It’s a shanda the RJC would amplify and support Trump’s policies, which are antithetical to Jewish values.”

Few other Democrats have publicly weighed in on the controversy except when asked by reporters. Mark Mellman, president and CEO of Democratic Majority for Israel, which supports a strong U.S.-Israel relationship, said that “there are a million issues that get discussed [by the presidential candidates] and most Democrats are making a real effort to stay out of it.” 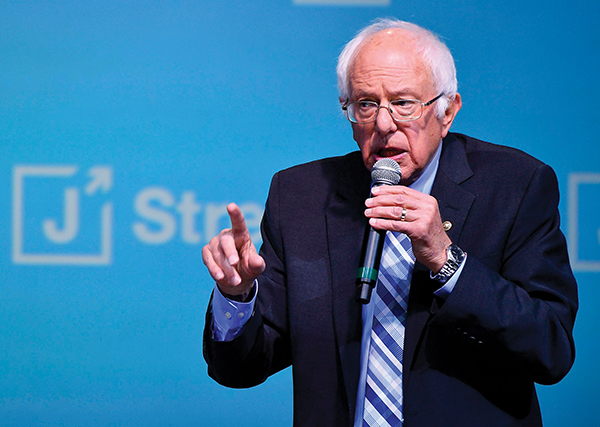 Sen. Bernie Sanders told the recent J Street conference that if elected president he would divert some Israel aid to Gaza. Getty Images

America’s military aid package, negotiated in the final days of the Obama administration and passed by Congress last year, provides $38 billion in defense aid for Israel over 10 years. Unlike the previous military agreement with Israel that allowed 26.3 percent of the aid to be spent on Israeli-manufactured equipment, this package — which covers fiscal years 2019 to 2028 — decreases the amount that may be spent in Israel until it is phased out completely in fiscal year 2028. The agreement was ratified overwhelmingly by both houses of Congress on a bipartisan basis.

A progressive group of freshman legislators have challenged that consensus. Rep. Alexandria Ocasio-Cortez (D-N.Y.) told Yahoo News recently that reducing aid to Israel or placing conditions on it was “certainly on the table” and that “conversations are happening in our caucus” on this matter. This summer, when she was blocked from visiting Israel because of her support for boycotts of the country, Rep. Ilhan Omar (D-Minn.) said aid should be withheld if the Israeli government continued to expand settlements and denied “full rights for Palestinians.”

Among the few Democrats who have commented publicly on the candidates’ comments is Rep. Jerry Nadler (D-N.Y.), who told Jewish Insider that leveraging aid to Israel is “wrong.”

“The Israelis need it for defense,” he said. “Whether we approve or disapprove of specific policies, we shouldn’t use military aid as a pressure point on specific policies — because Israel’s security is paramount.”

The Conference of Presidents of Major American Jewish Organizations, representing 51 national Jewish groups, said restricting aid would “undermine the ability of our key ally to defend itself against the threats it faces on all its borders.”

Malcolm Hoenlein, the group’s executive vice chairman, told NJJN that he would like to hear more “Democratic voices say this is not the direction we should take.… Democratic members of Congress supported the aid bill that was put forth by a Democratic president, and I feel confident the majority of Democrats are pro-Israel and will maintain the support.”

J Street said in a statement that although “our tax dollars should only be used in accordance with our laws and to further our policies and interests, saying this does not amount to a call for reducing or conditioning American assistance.”

A spokesman for the American Israel Public Affairs Committee, the major pro-Israel lobbying group, told NJJN: “At a time when America needs strong and capable partners in the Middle East, Israel is our indispensable ally in that vitally important region. Given the growing and immediate threats to Israel from Iran and its proxies, we should certainly not attach conditions to protecting our ally’s security.”

The idea of conditioning American aid to Israel was “very unfortunate talk,” according to Jason Isaacson, the American Jewish Committee’s chief policy and political affairs officer.

“The funds allocated to Israel are for defensive purposes — Israel is defending the security of Israel and America’s national interests generally,” he said. “Tinkering with that would be dangerous.”