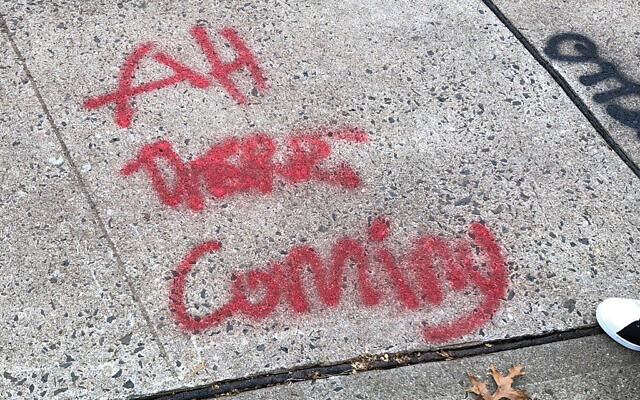 Hadassah Geretz stood in front of a crowd of more than 200 at a community forum to say she no longer felt safe living an openly Jewish life in Highland Park after the sidewalks and trees outside her synagogue, Congregation Ahavas Achim, were spray-painted with hateful symbols.

Addressing a panel of religious, law enforcement, and civic leaders Dec. 30 at the Bartle Elementary School, she said, “We are scared of somebody shooting people every time we go to Glatt 27,” the local kosher grocery store.

Her comments were echoed by Ahavas Achim Rabbi Steven Miodownik. “Right now, we do not feel safe even in little Highland Park,” he said, calling on local, state, and federal authorities to provide more funding for full-time security at Jewish institutions. “We know what happened to five members of our family in Monsey can easily happen here,” referring to the Dec. 28 attack when a 38-year-old man wielding a machete burst into the home of Rabbi Chaim Rottenberg, where several chasidic Jews were celebrating the seventh night of Chanukah. Five people were injured, including an elderly man who remains in critical condition and reportedly will be paralyzed for the rest of his life.

The borough of Highland Park convened the forum following the discovery of graffiti on South First Avenue, Johnson Street, and Cedar Avenue two days earlier. None of the spray-painted graffiti was overtly anti-Semitic, according to officials, but there were satanic references and an anti-LGBTQ slur, “777 Eddie.”

Abrams acknowledged that the teens’ alleged act was “hurtful” and “painful” for the community, but investigators determined “these acts were not perpetrated with bias intent,” according to a statement emailed to NJJN following the forum.

The investigation was conducted by detectives from Highland Park, the Middlesex County Prosecutor’s Office, and the New Jersey Office of Homeland Security and Preparedness. 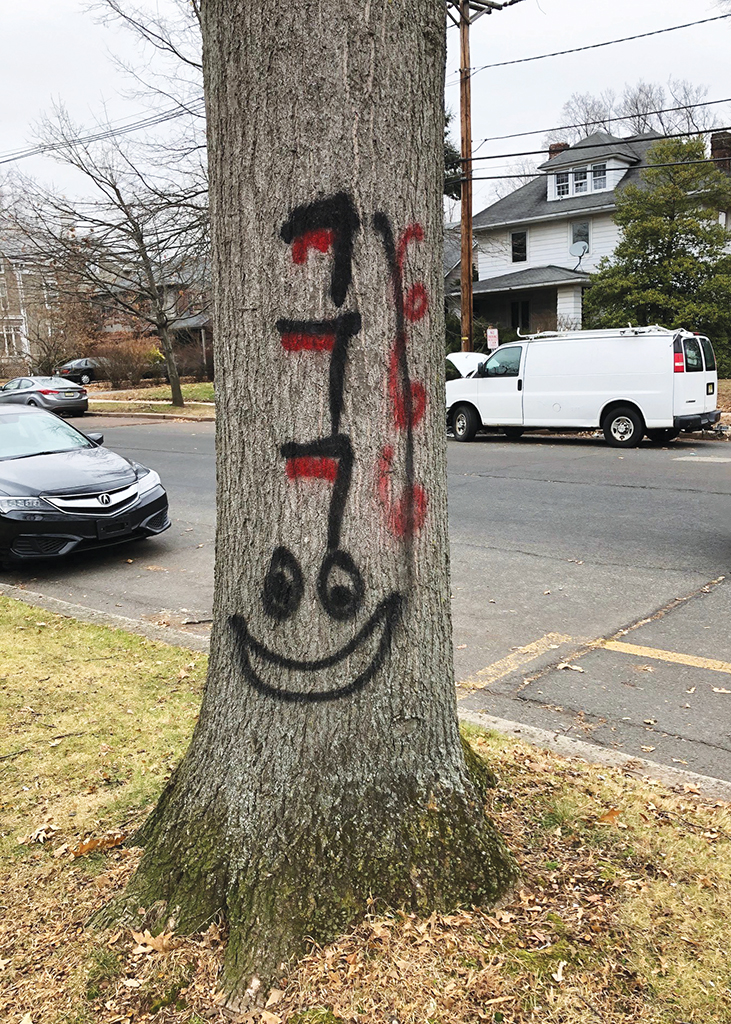 A tree on the property of Congregation Ahavas Achim in Highland Park vandalized with satanic and anti-LGBTQ symbols.

Acting Middlesex County Prosecutor Christopher Kuberiet said the teens will be made “acutely aware” of the pain they caused, and their cases will be reviewed by the prosecutor’s juvenile unit. Because of their ages and the unit’s desire to focus on rehabilitation, the pair may be given community service in lieu of a criminal trial.

“Any graffiti sprayed on or near a synagogue, or any house of worship, is, at the least, a blatant act of disrespect of that faith community,” said Mayor Gayle Brill Mittler.

Police patrols have been increased around houses of worship and Jewish businesses, according to Brill Mittler, and an additional officer will be added to the police department’s current roster of 27 members. She also announced the re-establishment of the mayor’s community response team, and said community forums and other programs will be held to discuss combatting anti-Semitism.

After she vowed that an anti-Semitism resolution will be passed by the borough council in the coming months, the audience responded with a loud ovation.

“Jewish Federation in the Heart of New Jersey is working in lock step with law enforcement at the local, state, and federal levels to address the needs and concerns of the Jewish community,” said Susan Antman, federation’s executive director, in a statement provided to NJJN.

Antman advised reporting suspicious behaviors or activities to local law enforcement and then following up at 866-4-SAFENJ (866-472-3365), NJBIAS@NJDCJ.org, or jewishheartnj.org/incident.