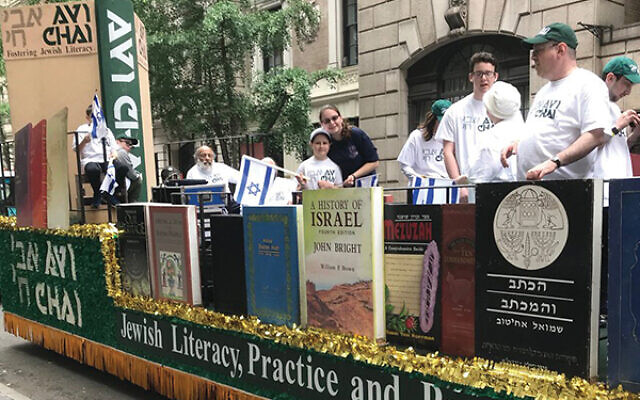 An Avi Chai float at the Celebrate Israel Parade. “[The foundation] focused sharply on Jewish literacy,” an observer says.

After 35 years supporting Jewish educational research and programming, it will phase out at the end of this year, after spending down the majority of its assets and ceasing its operations in North America.

While the foundation will not completely zero out its bank accounts, leaving behind an endowment for its campus in Israel, the foundation will no longer make any grants. The sunset date, Dec. 31, 2019, has been set for more than 10 years and the process itself has been carefully planned by Avi Chai’s staff and trustees.

The impact of Avi Chai’s investments in developing the education field through professional development programs, research on education and philanthropy and consolidating resources within the field will likely be felt for years to come.

But Avi Chai’s disappearance may mark the end of an era when Jewish day schools and residential summer camps were placed at the very top of the list of communal educational priorities. At a time when pricey tuition continues to put day schools especially out of reach for many Jewish parents, and when price has become a major concern among the Orthodox, who are day schools’ most loyal constituency, other funders are investing more heavily in supplemental and adult education.

When Zalman Bernstein, founder of the investment firm Sanford C. Bernstein and Company, set up the Avi Chai Foundation in 1984, his intention was encouraging Jewish observance and education, a mission which further narrowed to focus on day schools and residential summer camps.

“It focused sharply on Jewish literacy,” said Jack Wertheimer, a professor at the Jewish Theological Seminary and a senior consultant to the foundation, noting that “most other foundations are not terribly involved in literacy, learning, knowledge.”

It also gave $158 million in interest-free loans to schools and camps for capital projects.

Among the hallmarks of Avi Chai’s work were its summer program at Harvard University’s Graduate School of Education for principals of Jewish day schools and its Jewish New Teacher Project for day school educators at the beginning of their careers. “When we started, there was much less of a professional development culture,” said Prager. “Now that has blossomed; I can’t say it’s checked off, but it’s a different field in that sense.”

“A very significant percentage of day school heads and other administrators who are in the field today have been touched by various programs Avi Chai ran for them,” said Wertheimer.

From the beginning, Bernstein wanted to guard the foundation from “mission drift” before, as a forthcoming book on the foundation puts it, “future leaders could take it off course.” In addition to the sunset clause, he appointed a small board of confidantes and named his wife, Mem, as his successor. Bernstein died in 1999 at age 72.

As the foundation entered its last 10 years and began to seek new supporters for its grantees, its approach to strengthening Jewish education shifted from going-it-alone to a more collaborative mindset. Prager described a “field-building” approach, pointing to the 2016 merger of several day school associations, shepherded by Avi Chai, into a single association called Prizmah. He called it an example of consolidating resources to increase efficiency.

Prager said the sunset process forced the foundation to think more strategically about its grant-making and about its grantees’ operations. “When we first started planning for spend down, we began to be much more explicit about what we were trying to achieve,” he said.

Felicia Herman, executive director of the Natan Fund, said she was not worried that Avi Chai’s exit would negatively impact the day school field. Avi Chai “didn’t just make grants, they also funded infrastructure, mergers, research, capacity-building and technical assistance for grantees,” Herman wrote in an email. “They used so many of the tools in the philanthropic toolbox to try to build a robust ecosystem whereby organizations (schools, camps, networks) could strengthen their ability to fundraise and to support the system.”

But one issue of concern to the Avi Chai Foundation — and one that continues to loom large over the Jewish education field — is the affordability of immersive Jewish educational experiences like day school and summer camp. Day school tuition averages about $16,000 nationally, and some Jewish high schools in big cities can cost $35,000 a year. In the meantime, according to Avi Chai, “most Jewish day schools are systemically under-funded,” in large part due to the pressure to provide scholarships.

The foundation was an early supporter of blended learning, a teaching method that reduces the number of teachers in the classroom as a way to lower costs, but Prager said it has not yielded as much cost savings as anticipated. Avi Chai also supported initiatives to lobby for government funding for private schools, a politically sensitive issue that hangs on questions about church and state.

While the foundation supported programs that encouraged local day schools to engage donors and set up endowments to support scholarships, the foundation never provided grants to fill budget deficits or directly provide scholarships.

“Our resources were a drop in the bucket relative to the need; there are many hundreds of millions of dollars in scholarships that schools give away in a year and our total annual spending was up to $20 million per year,” said Prager. “We would have not been able to do all the innovative programming that we did if we were just giving money away in scholarships.”

But Prager acknowledges the seriousness of the problem. “That’s an area where I wish we had been able to do more,” he said.

Avi Chai is joining the first wave of Jewish foundations coming to a close. The Andrea and Charles Bronfman Philanthropies closed in 2016 and the Richard and Rhoda Goldman Fund wound down in 2012. Whether sunsetting will become a trend in Jewish philanthropy is not yet clear, but observers say the way Avi Chai went about its sunsetting process, with its well-publicized reports, increased awareness of the practice among funders.

With plenty of advance notice, Avi Chai spent much of the last decade securing new funders for its grantees. Prizmah, the Jewish day school association that resulted from the merger of several smaller associations, received a grant of $4.5 million from the Jim Joseph Foundation in 2019. The Jewish New Teacher Project, another program started by Avi Chai, received $1.5 million from Jim Joseph as well as a grant from the Chicago-based Crown Family Philanthropies.

“In the case of Avi Chai, they started preparing with their grantees many years ago, so it’s not a surprise,” said Jeffrey Solomon, former president of the Bronfman Philanthropies. “It’s very different from after the Madoff disaster where foundations closed overnight.”

Lila Corwin Berman, a professor of Jewish studies at Temple University, said the Bronfman Philanthropies’ example proved that “life went on” after the sunsetting of a major donor. “Clearly Bronfman not being around has had an effect, but the space then opens up to other funders.”

“There’s cause for optimism because new foundations with significant means with an interest in Jewish life continue to be created,” said Wertheimer.

But as Avi Chai ends its 35-year run, the prospect of another foundation taking on a similarly narrow focus, or even one focused on Jewish education more broadly, seems unlikely.

“Will another big, staffed foundation step in to play exactly the role that Avi Chai has played? Not likely,” said Herman. “But what we know is that already, in part thanks to Avi Chai, many funders of different sorts are already investing both in the individual institutions and in the networks that strengthen and sustain them.”

“We’re probably not going to see a foundation that is as laser-focused as was Avi Chai on a particular element of Jewish life,” said Sandy Cardin, former president of the Charles and Lynn Schusterman Foundation. “The way we live now is so different, things are so integrated, that to be able to make a difference, foundations are going to have to have a little bit of a broader perspective.”