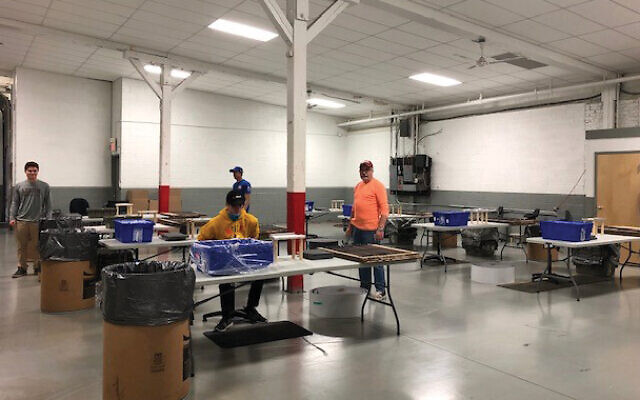 The production of face shields returned jobs to 100 employees of Rotuba.

There really wasn’t much for Adam Bell to consider.

Bell is the third-generation owner of Rotuba, his family’s plastics business. As Covid-19 was spreading, personal protective equipment was in dangerous short supply. A friend mentioned to Bell that he knew of an oncologist who didn’t have access to face shields and wondered if Bell could manufacture them.

Although his 50,000-square-foot plastics operation in Linden was still running, his 40,000-square-foot ballpoint pen factory in Garwood was closed because his supplier had shut down during the pandemic. (Rotuba purchased the Pen Company of America in 2012.)

How could Bell say no to physicians’ important needs? In addition to providing a critical item in a crisis, he could bring employees back to work.

It didn’t take long for Bell to enlist the help of a customer company to turn Rotuba’s plastic pellets — manufactured in Linden — into plastic sheets, cut them into squares, and sell them back to Bell. And he converted the shuttered pen factory into an assembly plant and brought 100 employees back to work. 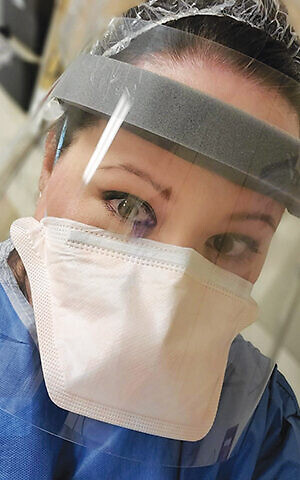 Some 50,000 face shields are produced every week in a converted factory owned by Adam Bell, a member of Ahavath Torah: Chabad at Short Hills.

Now in their fourth week in their new iteration, the workers in Garwood are busy punching holes in the plastic squares, rounding out corners, adding foam and a Velcro strip, and then packaging and shipping the face shields out. They are producing 50,000 face shields every week, according to Bell, and supplying hospitals in the Atlantic Health System, Hackensack Meridian Health, and Robert Wood Johnson University hospitals. They’ve also donated face shields to the Los Angeles Fire Department through the Gary Sinise Foundation — founded by the actor to provide for “our defenders, veterans, first responders, their families, and those in need,” according to its website — and are supplying nursing homes and EMTs as well. Some have been sold, more or less, at cost, but Bell said they have begun running the production of face shields more like a business and donating a portion of the proceeds.

Bell; his wife, Nicole; and their three children, ages 19, 16, and 13, live in Millburn and attend Ahavath Torah: Chabad at Short Hills, in part because of the charm of Rabbi Mendel Solomon. “He’s an amazing rabbi with unbelievable passion who can understand the day-to-day realities of his Chabad members,” said Bell.

He grew up Belle Harbor, N.Y., and attended both the Modern Orthodox Ohab Zedek Belle Harbor and the Conservative Temple Beth El of Belle Harbor. Despite their success in business, his family is better known for their Jewish values — and original name, Bielski — than their corporate know-how: The 2008 movie “Defiance” is based on the story of three Bielski brothers, Zus, Tuvia, and Asael, who ran a Jewish resistance effort during the Holocaust and rescued 1,200 people in the forests of Poland.

Basic Jewish values are part of the family’s genetic code, Bell said. “If you follow the tea leaves,” he said, referring to his ancestors, “I couldn’t sit and do nothing. That’s what drove me to do this.”