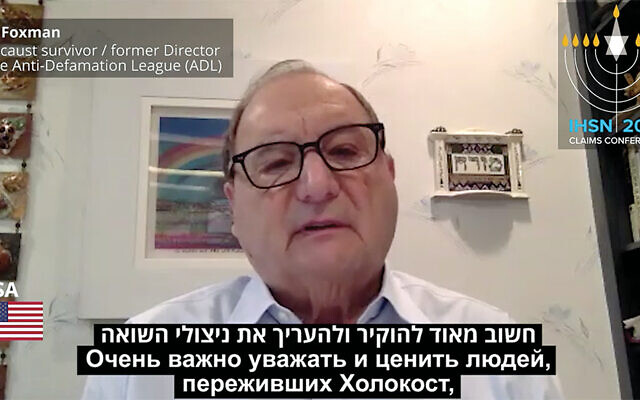 The Conference on Jewish Material Claims Against Germany — less formally known as the Claims Conference — held the annual International Holocaust Survivors Night on the third night of Chanukah. The online program featured remarks from Holocaust survivors, entertainers, Israeli president Isaac Herzog, Olaf Scholz, Germany’s incoming chancellor, and many other dignitaries. The annual program has grown each year and now includes more than 15 countries across six continents.

Among the participants from the New York/New Jersey metropolitan area were Abe Foxman of Bergen County, a Holocaust survivor and national director emeritus of the Anti-Defamation League; Matthew Bronfman, Claims Conference board member and chair of the American Jewish Committee; and Jack Kliger, president and CEO of the Museum of Jewish Heritage — A Living Memorial to the Holocaust. Entertainers including Emmy-nominated actors Jason Alexander, Tovah Feldshuh, and Mayim Bialik, and musical performances from Barry Manilow, Steven Skybell, Jennifer Babiak, and the Maccabeats performed.

“Today, it is imperative for Holocaust survivors to bear witness and to tell their story,” Mr. Foxman said. “And certainly there is no better time than on Chanukah, when we not only remember our past history, but we celebrate rebirth and the future.”

“Chanukah is the festival of light, which even in difficult times brings hope into the darkness,” Mr. Scholz said. “And therefore, anti-Semitism, the belittling of Jewish citizens, hatred towards Israel — we will not tolerate any of it in Germany.”