After years as an opera performer, Anthony Russell found room for his voice at Congregation Sons of Israel in Nyack.

The year was 2010, and he had recently converted to Judaism and was living in Nyack with his future husband, Rabbi Michael Rothbaum, who at the time was a campus rabbi for Hillel of Westchester County. (Now they live outside of Boston, where Rabbi Rothbaum leads Congregation Beth Elohim in Acton.)

The synagogue was taking part in an interfaith Thanksgiving concert with other congregations in town. The synagogue members performed a medley that began and ended with a niggun, a wordless chasidic tune.

“I was very taken with this melody,” Mr. Russell said. “And I was taken by the idea that a wordless melody could inhabit any number of religious feelings without saying a word. I was given a solo in this niggun and when I performed it, I put a little bit of an operatic spin on it. When I came to the last note I sang it an octave higher and let it float over the choir. Having that moment where I could inhabit the music was really moving to me.

“Every time I perform Jewish music, there’s a part of that moment that I try to find.”

Since then, Mr. Russell has shifted his career from opera to Yiddish music — specifically, Yiddish art music. This coming Thursday, April 22, he will perform his music in a streamed program for the Allen and Joan Bildner Center for the Study of Jewish Life at Rutgers University (see below). And the day before that, YIVO will premiere the first such song that he composed (also see below).

So what is Yiddish art music?

“The 19th century was full of composers exploring the sounds of their respective cultures and adapting them for performance on the concert stage,” Mr. Russell said. “In the same way, a school of Jewish composers emerged that explored the sounds and themes and moods of Jewish culture and turned it into music for the concert stage. Yiddish art music comes from that. It’s a way of distilling moments of Ashkenazi life for artistic consumption.

“It’s part of an entire web of culture, along with Yiddish literature, Yiddish theater, Yiddish cabaret, places where people not only depicted the lives of Eastern Europe but commented on them and sort of embroidered on them.

“It’s really easy for people to dismiss Yiddish art song as an artifact of another time. In a way it is. It represents a moment and a milieu, a certain way of being Jewish in the world. It was something that was open to everyone, a part of the culture, in the same way people used to tune in every Saturday afternoon to the Metropolitan Opera radio broadcast.”

Mr. Russell found in Yiddish art songs “a frame through which I could inhabit stories about myself. I could take a song about a lonely yeshiva bocher who is wondering about what is going to happen to his life, who is coming from a place of hopelessness due to any number of factors, and I could perform that song as myself, as a Black man who has often asked myself many of the same questions as this yeshiva bocher was asking at the end of the 19th century.

“For Yiddish art songs, all I had to do was to show up and be a Jew and that would give me a lot of insight into how to perform it,” he said. “It allowed me to express myself as a vocalist in a way I could not in other genres classical singers usually perform in. In opera, the directive is to subsume yourself into the character, not inhabit it as an extension of yourself. In my personal experience of being a classical vocalist, there were a number of strictures in the way the music was performed that really prevented me from singing the music as expressively as I wanted to.”

“Yiddish art song also has a tradition, a style, a manner in which one performs it, but there wasn’t so much active policing in the way it was done,” Mr. Russell continued. “You can take one Yiddish art song and can find it performed in any number of different ways by any number of Jewish performers over the course of a hundred years.”

Yiddish songs have been preserved both on recordings and on sheet music. Mr. Russell draws much of his repertoire from a book of 70 Yiddish art songs for piano and voice that were collected and arranged by Sidor Belarsky, who sang for the Los Angeles Symphony in the 1930s, recorded dozens of records of secular and religious Jewish music, and taught at the Jewish Theological Seminary of America.

(Pro tip from Mr. Russell: You can listen to 72 of Belarsky’s recordings, along with thousands of other Jewish records, courtesy of the Florida Atlantic University. Find them online at rsa.fau.edu/judaic.)

Mr. Russell now has entered the tradition of the Yiddish art song as a composer, as well as a performer. On Wednesday, a song that he composed will be performed online by students at Bard College’s Graduate Vocal Arts Program, courtesy of YIVO, which commissioned the work and four others. 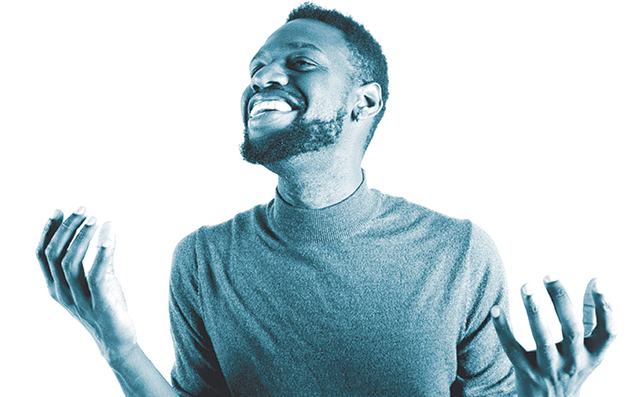 The new songs commissioned by YIVO are based on Yiddish folk songs.

Mr. Russell’s contribution to the YIVO program is “a setting of a folk song called Yona Hanavi, a song about Jonah the prophet,” which he worked on with a composer named Uri Schreter.

He started by transcribing the folk song’s melody; then he added accompaniment. “The music the pianist plays is technically difficult music,” he said. “It’s very contemporary classical in its composition; in that sense it’s definitely an art song.

Recently, Mr. Russell went back to Congregation Sons of Israel (virtually) for a performance and conversation under the synagogue’s ongoing program of “Un-centering Whiteness in Jewish Life.”

“It was a real tikkun, a real closing of the circle,” he said. “I had really come into my Jewishness with this community of people. It was gratifying to return to them and give something back.”

Mr. Russell “has a lot to say about the relationship between the Black community and the Jewish community, and the historical realities that informed the relationship, and the responsibility these communities have for each other in the ongoing fight for equality in the United States,” he said. “The format allowed me to talk about my experience as a Black person.

“I think it’s important for American Jews to realize that, to paraphrase James Baldwin, Jews came to the United States out of the house of bondage to a place of freedom. Black people in the United States are still living in our Old Country. Our Cossacks are still here. We have no other place to go.

“Certain unsympathetic parties are asking why Black people can’t get over the traumas they suffered in the United States. When you live in the same country where so many horrible things happened, where numerous atrocities were committed against your people because you were a minoritized person, it’s not something you can easily get over.

“I’ve been very privileged to make two trips to Jewish Eastern Europe, Belarus in 2017 and Poland in 2018. When I’ve come back from the trips, I occasionally interacted with American Jews and so often I hear people say, ‘Poland? No way I could possibly go back to Poland.’

“Black people live in their Poland. Their mothers and grandmothers and great grandmothers have lived in the same place and we haven’t had another place to flee to. I would like to think American Jews would have a little rachmones” — compassion — “for the difficulty of living with this history when you feel like you’re living with Cossack history every day. I hope that with this rachmones that Jews who felt threatened by a movement like Black Lives Matter will consider what the movement is trying to do, and what historical wrongs it is trying to address.”

In 2018, Mr. Russell released an album, “Convergence,” that he recorded with the klezmer group Veretski Pass. It featured an intermingling of Jewish songs and African American spirituals. In a class he led at a Boston-area synagogue, “We looked at tracks from my album in a way to have a conversation between these two realities” of Ashkenazi Jewish and African American histories.

“Something really fascinating: Over the course of the 19th century, both of these communities experienced an emancipation,” he said. “The Jews of Europe were emancipated by Napoleon. African Americans were supposedly emancipated by Lincoln.

“The rest of the history is an exploration of how poorly this emancipation went. European emancipation gave Jews the ability to move more fully in European society — and to move to America.

“As far as the emancipation in the United States, there has been lip service to the concept of emancipation, while violence is still performed on them as if they were still enslaved. In many ways it was emancipation in name only.

“I mentioned having rachmones. At this particular time, we need more than rachmones — we need action. We need people to come together and work toward the goal of racial equality in the United States.”

What: Digital premiere of five new compositions engaging with Yiddish folksongs, including one composed by Anthony Russell. Performances by members of the Bard Graduate Vocal Arts Program

What: A World Within Worlds: The Music of Anthony Mordechai Tzvi Russell — A Musical Performance and Presentation

Sponsored by: Allen and Joan Bildner Center for the Study of Jewish Life at Rutgers University

Where: Online via Zoom