At Makhtesh Ramon with, from left, the Gertlers, the Lipsteins, the Hochhausers, the Schechters, the Steins, the Zlotnicks (in front), the Krugs, and Peter Abelow.

If an ad agency needed a poster couple to illustrate the joys of retiring to Israel, Phil and Shelley Stein would be a good choice. So would any of the other former New Jersey residents who often join the Steins on day trips across Israel.

The Steins made aliyah from Teaneck four years ago and live in Ma’aleh Adumim, a suburb northeast of Jerusalem. They kicked off their weekly travels in late October 2020. This was when, as Mr. Stein put it, “the government started releasing the reins on corona and people began going out again.”

They chose a free Tuesday for their first “tiyul,” the Hebrew word for “trip.” Their destination: the Mediterranean coast.

“I always wanted to watch the sunset from Palmachim Beach,” Mr. Stein said. “I’d never been there but I heard about it. So we went there, and I posted our sunset pictures on Facebook. I tagged them ‘#TiyulTuesdaywithShelleyandPhil.’ And it sort of caught on.”

The Steins would wake up on Tuesday mornings and spontaneously decide where to explore. The long list of their trips includes many places in Jerusalem or environs, such as Ammunition Hill, the Western Wall Tunnel Tour, the Gush Katif Museum, City of David, the Moshe Castel Museum, and Ein Prat spring. They visited the beach in Ashdod and the Agam Museum in Rishon LeTzion.

“Our tiyuls are our raison d’etre here,” Mr. Stein. “We’re retired. My Facebook profile says ‘Lover of Eretz Yisrael.’ The Land of Israel is our classroom, and we want to see it all.”

Before setting out to explore the Stalactite Cave Nature Reserve near Beit Shemesh, they invited Ellen and Richard Gertler, who made aliyah from Teaneck two years ago and live in Beit Shemesh. The foursome made a day of it, including a picnic lunch.

When the Steins made reservations to visit the Psagot Winery, they were told that the tour in English could accommodate up to 10 people. So they invited the Gertlers and their friends Barbara and Allen Kessel, originally from the Highland Park-Edison area, who brought along Chicago expats Jeff and Mara Shanes.

“We lived in Highland Park for 20 years before moving to Teaneck for 20 years,” Ms. Stein said. “A lot of people we knew from both these places made aliyah as they retired.” 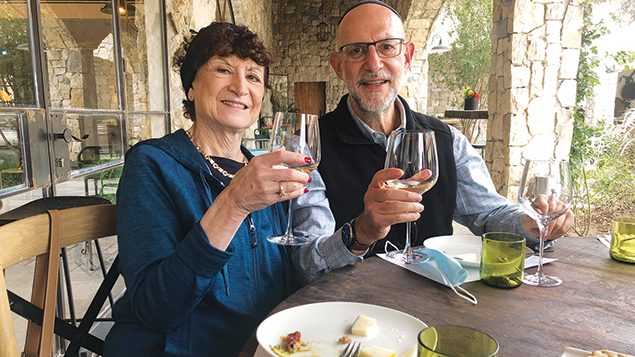 Shelley and Phil Stein enjoy a meal — and wine — at Psagot Winery.

The Gertlers invited the Steins to join them one Tuesday to hike around some sites in the Jerusalem hills, including Flam Winery and the Scroll of Fire and Anne Frank Holocaust memorials.

The Gertlers also invited their son-in-law’s parents, Daniel and Zelda Wildman, formerly of Edison. The Wildmans brought along Sandy and Phyllis Zlotnick and Mimi and Marvin Schechter, new arrivals from Teaneck.

“Mimi said, ‘This is great. We ought to have a group for Tiyul Tuesdays!’” Mr. Stein recalled.

The Wildmans, who moved to Jerusalem in 2018, had been taking day trips as well. Their first one, to Caesarea, was led by their tour guide son-in-law, Rabbi Moshe Rothchild, originally from West Orange. The group expanded organically as friends of friends joined in, and later latched up with Tiyul Tuesday.

Mr. Wildman said the outings are “not only about discovering the country but about bonding with a larger and larger group of friends. Our tiyul often ends up at a winery and then we buy wine and have lunch together. We always walk away with a warm feeling about the day.”

“It’s amazing,” Ms. Gertler added. “We didn’t know all the people that well, even those we knew since the 1970s but who lived on different sides of Teaneck, like Marvin and Mimi Schechter and Johnny and Phyllis Krug. And now we get to spend time together.”

Eleven couples participated in a tour of the ANU Museum in Tel Aviv – formerly called the Diaspora Museum – guided by Ms. Wildman’s cousin, a 40-year employee of the museum.

The most ambitious trip was an overnight to Mitzpeh Ramon in the Negev, home of the famed Makhtesh Ramon, the world’s largest erosion crater.

The eight couples included Debbie and Peter Abelow from Efrat; Ms. Abelow is the sister of Ms. Zlotnick. Mr. Abelow is a professional tour guide, who once guided a mission from Teaneck’s Congregation Beth Aaron in which the Gertlers participated. 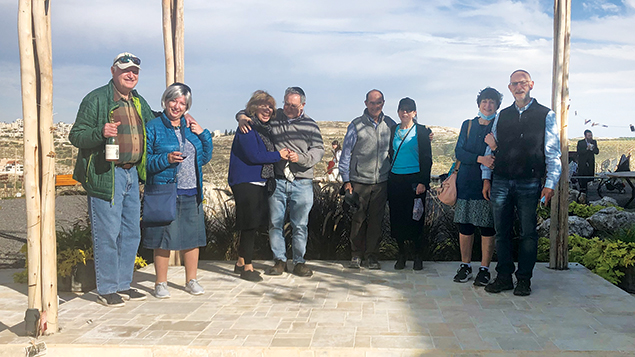 A Tiyul Tuesday outing to the Psagot Winery: from left, Barbara and Allen Kessel, Jeff and Mara Shanes, Ellen and Richard Gertler, and Shelley and Phil Stein.

“The trip to Mitzpeh Ramon was very special,” Dr. Gertler said. “Peter booked us a jeep tour in Makhtesh Ramon and knew other interesting places to go. We went stargazing at night with ‘Star Man’ Ira Machefsky,” who moved to Mitzpeh Ramon from Englewood with his wife, Pam, in 2009.

The Steins’ outings occasionally have included other retired or semi-retired friends from the “old country.”

They visited Nachal Chalilim – Flute Cave, so called because of the sound the wind makes as it blows across holes in the top of the cave – with their Ma’aleh Adumim neighbors, Judy and Larry Rebacz, formerly of Highland Park. They toured an outdoor international photo exhibit in Tel Aviv with Phyllis Reich and Lloyd Nakao, who made aliyah last year from Teaneck and live in Tel Aviv.

“One Tuesday we went to Ein Karem village on the outskirts of Jerusalem and found a craft shop where I saw tables made with ceramic tiles in a wrought-iron frame,” Ms. Stein said. “I worked with the artist to make three tables for us with tiles of our choosing.”

The Malchuta shop’s co-owner, Leah Silver, told them that her father was from Freehold, where Mr. Stein’s family is from. It was one of those “only in Israel” moments.

“It turns out, her aunt was a good friend of Phil’s aunt,” Ms. Stein said. “And it also turned out that our two oldest boys had spent a night in her parents’ house in Mevo Modi’im when they were in Israel for their gap year.”

Some of the Tiyul Tuesday couples also have gone on trips organized by an outfit based in Ramat Beit Shemesh called the Greybeard Experience, aimed specifically at English-speaking residents or tourists at least 55 years old.

A similar travel group is led by Rabbi Eugene Kwalwasser, the retired principal of Yavneh Academy in Paramus who now lives in Beit Shemesh. “We went to Eilat two years ago on the eve of the pandemic with Rabbi Kwalwasser’s group,” Dr. Gertler said. A retired dentist, he also is an avid biker.

Ms. Wildman said that while going on guided tours “is really nice, experiencing it on our own with friends is amazing. It’s almost like discovering things the way we used to do as children on bikes.”

She added that she’d been reluctant to make aliyah, agreeing to the move mainly because it meant so much to her husband.

“I was upset about what I was giving up,” she said. “But I have found such an enriched life here. Had I known, we would have come years earlier. Danny always said our ‘treasure’ was waiting for us here in Israel, and that was true.”

Tiyul Tuesdays are part of that treasure. “We have made many new friends and reconnected with old friends, and these are such deep relationships because we all share the same values. We are walking the walk, not just talking the talk.”