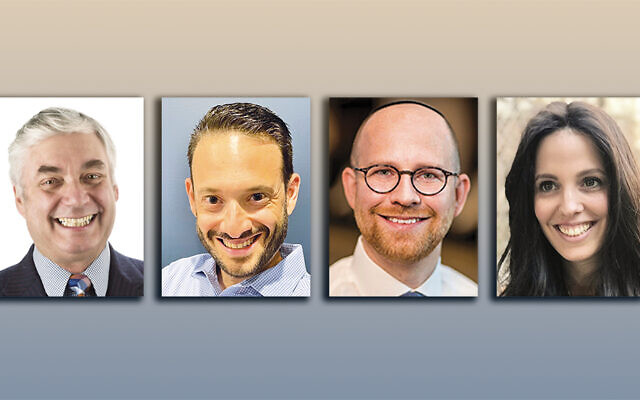 Fred Kessler of Cranford, Jewish Family Service of Central NJ’s board president, announced the election of four new members to the JFSCNJ board at the agency’s recent annual meeting.

They are Jay Buchsbaum of Elizabeth, Jason Hoberman of Scotch Plains, and Dr. David Hoffman and Leah Kaminer, both of Springfield.

Jay Buchsbaum is a seasoned community leader who became active in various community organizations as soon as he and his family moved to Elizabeth more than two decades ago. A Yeshiva Be’er Yitzchok of Elizabeth board member for 20 years, he served on the YMHA of Union County board for 15 years, and with the Chevra Kadisha of Elizabeth, the Hatzalah Volunteer Ambulance Corps, M.A.S.K, and with Nachum Segal’s not-for- profit organization. A Touro College and Grossman’s Guide to Wines, Spirits, and Beers graduate, Mr. Buchsbaum is the executive vice president of marketing at the Royal Wine Corp. of Bayonne. He has built a successful career as a media personality working with winemakers and consumer groups to conduct seminars and wine tastings that educate the consumer to appreciate the outstanding kosher wines available. He looks forward to lending his expertise to broaden the reach of the JFSCNJ’s mission and programs. He and his wife, Brenda, have five children and 11 grandchildren.

Jason Hoberman, a lawyer from Scotch Plains, has made his mark on the Central New Jersey community, holding leadership positions in Congregation Beth Israel of Scotch Plains, the Jewish Federation of Greater MetroWest NJ, and the JCC of Central NJ, since moving to the area from Marlboro almost 14 years ago. A graduate of Emory University and Columbia Law School, he serves as the general counsel and chief compliance officer of Jacobs Levy Equity Management, Inc., in Florham Park, a quantitative investment management firm.

He is passionate about his commitment to lending his leadership abilities to serve a multitude of Jewish causes and ensure that future generations are able to serve the community. At Congregation Beth Israel, he’s been trustee, executive vice president, and president. At the federation, he started as a bus captain on the CommUNITY Mission to Israel and went on to become a member of the national allocations committee, the synagogue leadership council, and the local allocations committee; he became a NextDor Ambassador and will begin as a trustee. He also has co-chaired many JCC of Central NJ fundraisers and participated in the JFSCNJ 5K walk/run. His wife, Tracey, is vice president of the JCC of Central NJ and a member of the boards of Congregation Beth Israel and the Federation’s Women’s Philanthropy Division. Jason and Tracey are parents to Ashley, 14, and Reid, 10.

Dr. David Hoffman attended Yeshiva University after spending a gap year of study at Yeshivat Lev HaTorah in Israel. After graduating from Albert Einstein College of Medicine, he completed training in diagnostic radiology at NYU Langone Health in 2019. A radiologist with Atlantic Medical Group, he is based out of Overlook Hospital in Summit. He recently was nominated as a 2021 NJ Magazine top doctor as well as teaching attending of the year by his residents. David and his family live in Springfield, where he is involved with Congregation Israel of Springfield, the Jewish Federation of Greater MetroWest NJ, and Lev HaTorah in Israel. David became involved with JFSCNJ as the local Springfield drop-off for the Charlotte Shak Food Pantry during the pandemic. David and his wife, Yaffa, are parents of Talia, 9, Ariella, 6, and Elliot, 1. Yaffa, a native of Elizabeth, is associate director for the Center for Strategic Philanthropy for the Jewish Community Foundation of Greater MetroWest NJ. David looks forward to being involved with JFSCNJ. He hopes to use his medical background to the benefit of JFSCNJ and bridge new connections to local healthcare organizations.

Leah Kaminer attended Touro College and then Kean University ,where she received her MA in speech language pathology. She and her husband, Noah, live in Springfield, where she and her family are involved in nearly every aspect of their synagogue, Congregation Israel, where she is a trustee. She’s also involved in fundraising activities and the shul’s summer day camp and sisterhood, and collected food to donate food to Springfield’s first responders, police, fire, and first aid squad. She’s deeply committed to the mission of Jewish Family Service and looks forward to lending her creative leadership to helping underprivileged members of the community who are in need. Leah and Noah have five children — Riki, 16, Benjy, 13, Moshe, 10, Aliza, 5, and Yehuda, 2.