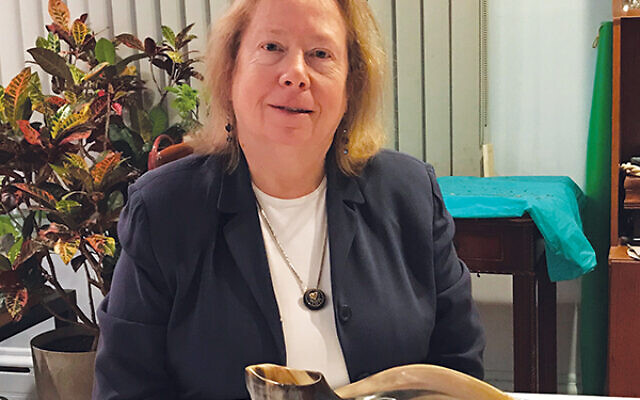 Rabbi Stephanie Dickstein with some of the religious objects she brings when counseling Holocaust survivors.

A few months ago, Edna Alberts, a resident of Parsippany and member of Congregation Agudath Israel in Caldwell, heard about a new program offered by the Joint Chaplaincy Committee of Greater MetroWest (an agency of the Jewish Federation of Greater MetroWest NJ). The program, associated with its Seniors at Home effort, provides the services of a professional chaplain trained to meet the unique needs of Holocaust survivors and their children.

She immediately thought about her parents, Alex and Judy Buchler, survivors who live in Rockaway. Her mother, 91, is in good health, but her father, 95, was not at the time, so she contacted the new chaplain, Rabbi Stephanie Dickstein, also a social worker, “to help them with some emotional issues my mom was having with my dad not being well,” Alberts told NJJN. “My parents thought she was wonderful to talk to, as well as the support she gave. My mom and dad’s friends aren’t around anymore for them to talk to.”

A resident of Highland Park and member of the Highland Park Conservative Temple Congregation Anshe Emeth, Dickstein arrived at the Buchler residence with a shofar, honey, lulav, and etrog, giving them comfort by noting that their survival is helping to rebuild the Jewish people and traditions. “I told Rabbi Dickstein I have great-grandchildren, four generations. Hitler didn’t beat us,” said Judy Buchler. “Am Yisrael Chai.”

Survivors, who experienced anti-Semitism at its worst, are admired for their resiliency in rebuilding successful lives. However, in their golden years they and their families may need some assistance with the aging process. Dickstein, 62, understands that their lives are complicated.

“To a certain extent, there is a piece [of life] with Holocaust survivors, whether they experienced the camps or not, that has affected them,” she told NJJN. “The younger generations, second, third, and fourth generations, just don’t get that part.”

Through her training and experience working with clients throughout the Greater MetroWest area, Dickstein recognizes that a unique approach is needed for her interaction with survivors. She also sees a desire for survivors to discuss what happened in the Shoah and how it affects them today. After all, many of their friends who lived through the Holocaust have already died. To that end, she works closely with Café Europa in South Orange and Elizabeth, a program of Jewish Family Service of MetroWest and Jewish Family Service of Central NJ, which brings Holocaust survivors to talk about loneliness and other issues as they approach the ends of their lives.

“Some may have known grandparents before the Holocaust, or maybe their parents or other relatives survived,” she said, but in many situations they don’t have any relatives that age they grew up with, and maybe they saw so much of what happened [in the Shoah]. As they become elderly, those experiences may affect them.”

Why would a family like the Buchlers need a specially trained chaplain? Dickstein gave some examples. The lives of many survivors, she said, “were interrupted at a key developmental time as children, say 2 or 3, or 15 or 17. Maybe they were hidden or sent away from their parents. As they near death at an advanced age, thoughts of that period can affect them.”

Also, “A family may be discussing plans for a funeral with an elderly relative who is a survivor, legitimately seeking input. Cremation may have come up in the discussion,” she said. To a survivor, the mention of cremation can bring back memories of Auschwitz or other camps.

The assimilation of the Jewish community and resulting interfaith marriages are also of concern to some survivors. In those cases, Dickstein said, they may wonder “What is the Jewish legacy and what is the Shoah legacy for their grandchildren?”

Previously Dickstein served as the spiritual care coordinator at New York City’s Jewish Board of Family and Children’s Services. She earned her master’s degree in social work and Jewish studies in a joint program between Columbia University and the Jewish Theological Seminary (JTS). She received rabbinic ordination in 1989 and was one of the first women to serve a Conservative pulpit in New Jersey, working with congregations in Hoboken and Verona.

Having served as the assistant dean of the JTS rabbinical school, Dickstein is the author of “With Sweetness from The Rock: Jewish Spiritual Support for Caregivers,” as well as chapters on caregiving and spiritual support in several books. She wrote the legal positions for the Conservative movement on mourning in the event of stillbirth and neo-natal death.

The $300,000 grant fueling the program was made possible by federal funds through the Jewish Federations of North America Center for Advancing Holocaust Survivor Care. Approximately two-thirds of the funds come from federal sources, with the other third from non-governmental sources including grants from the Grotta Fund for Senior Care, Iris Teen Tzedakah Fund, Jewish Community Foundation of Greater MetroWest NJ, Joseph and Rachel Luchfeld Memorial Fund, and in-kind contributions.

“We want people to know about this program,” said Robert Lichtman, federation’s chief Jewish learning officer, who oversees Joint Chaplaincy. “We are looking to help as many Holocaust survivors and their families who have the need. I wish we had six Stephanies.”

Survivors or descendants in need of a chaplain can reach Dickstein at rabbidickstein@gmail.com or 732-512-7363.