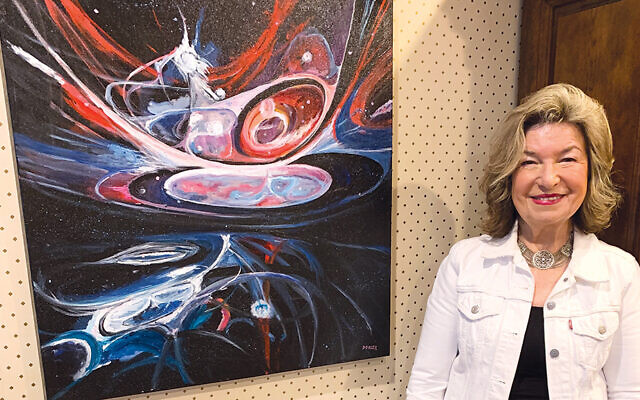 Rosalind Dorlen stands next to one of her paintings, “Birth.”

Even psychologists have their bad moments.

Rosalind Dorlen has been in private practice for more than 40 years. Her office is in Summit, where she also is on the staff of Overlook Hospital.

Given her background and experience, you’d think she could just roll with the punches. But the pandemic got to her as it did to almost everyone else.

“During the pandemic I realized that life was grim,” Dr. Dorlen, 78, said in a FaceTime interview. “I looked around and saw things sucked. So I decided to try to paint impressions of the universe. As terrible as things were, because things were so awful here, it made sense to me to look outside myself, to think about what’s really timeless. I found that depicting the vastness of the cosmos was calming.”

It should be noted that Ms. Dorlen also is an artist of some repute. (You could say the doc’s paintings are crazy good, if you’re reaching for a cheap laugh, which of course I would never do…) Most of her work has been on earth-based land and seascapes: birch trees, scenes from porches, mountains, and flowers. But a few years ago, she started painting what her son labeled as spacescapes, scenes from the Hubble telescope as filtered through her brush. “My interpretation of the stars and planets and the galaxy,” Ms. Dorlen says.

She had a New York exhibit of some of these early paintings scheduled for March 2020. And then covid happened. Not only was the show canceled, but so were her in-person therapy sessions. Hence the bad mood. But rather than wallow, she returned to her palettes and brushes and moved full speed ahead. The result: a dozen new abstract spacescapes for a solo exhibit that runs next month, from June 2 to June 30, at the Jadite Gallery at 660 10th Avenue in Manhattan. 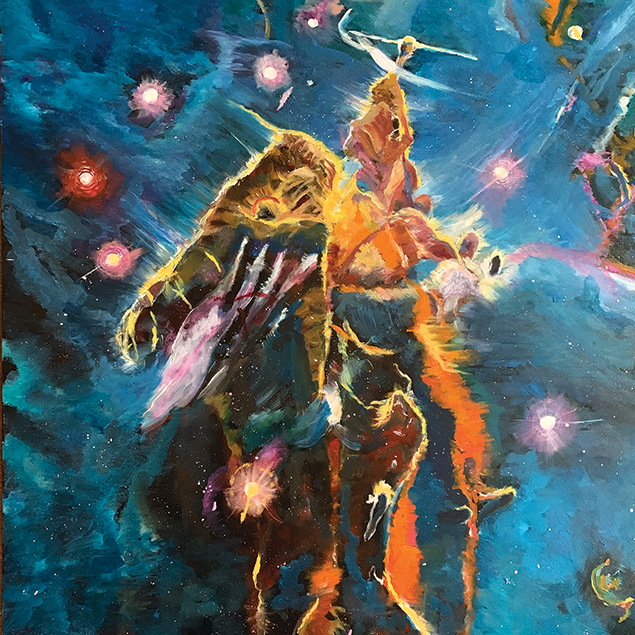 It is the culmination of a lifetime at an easel. Ms. Dorlen has been at it since she was a small child. “I started when I was a kid,” she said. “I did a lot of drawings, and as I got older, in my late teens, I started to paint with oils.”

She studied at the Art Student League in Manhattan and the New Jersey Center for Visual Arts in Summit as well as taking the obligatory college courses in art history. “I was an art history major,” she said. “For about three weeks.”

She also was an astronomy major for a couple of weeks, which explains the spacescapes. “I wanted to be an astronomer,” she said. Now, “I’m a Sunday painter. During the week I see patients. I have a studio in my house,” where she spends as many as 12 hours at a clip working on her art. “It’s a good thing that my husband loves football.”

She wavers when she’s asked if art is an inherent skill or if it can be taught. On the one hand, she says, art is a lot of hard work, quoting Michelangelo to prove her point. “I’d like to tell you that there is some internal inspiration, some natural gift. But Michelangelo said ‘If people knew how hard I worked to get my mastery, it wouldn’t seem so wonderful at all.’”

But she also says that “people tell me they can’t draw a straight line. I tell them they don’t have to. That’s why we have rulers. Everyone is an artist. I work with a lot of children and every child is an artist with natural talent until we criticize them and make them feel they’re not good at what they’re doing.

“I don’t know. I just know that I feel the need to create, to make art.” 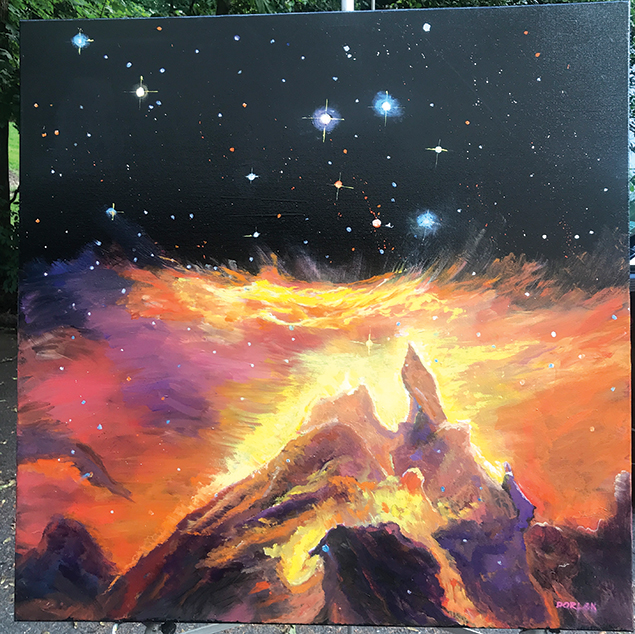 When she’s told that what she’s just said sounds like psychobabble, she admits, “I’m very good at that.”

Ms. Dorlen grew up in Newark, with parents, a sister, and a grandfather, an immigrant from Austria who taught her Yiddish. She doesn’t speak it, but still understands it well enough to claim she attended a performance of the Folksbiene’s Yiddish “Fiddler on the Roof” and did not need the supertitles.

Ms. Dorlen attended the same school her father did and belonged to a “shul around the corner,” she said. She and her two kids belong to Temple Emanuel of Westfield — she’s been a member there for 46 years, she’s a former member of the board of trustees, and one of her three grandchildren recently celebrated his bar mitzvah there.

Selling her paintings at the upcoming exhibit would be nice, but it’s not necessary, Ms. Dorlen said. “I don’t regard my paintings as children. I like people to enjoy my work. I’ve had a number of exhibits and I always sell some.

“But I have treasured friends and family I love to give paintings to. I don’t have to depend on peoples liking my work. I can paint what I like. I don’t give a rat’s [tuches] about how people feel about my paintings. That’s freedom.”