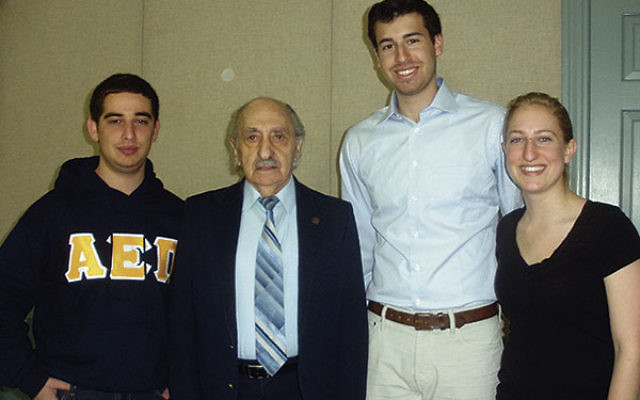 Students heard testimony from a Polish Holocaust survivor and saw a play about Righteous Gentiles during an interfaith Yom Hashoa program at Rutgers University in New Brunswick.

The April 27 program at Douglass College Center was sponsored by Rutgers Hillel as “a unique approach.” It integrated several perspectives “in an attempt to create a more rounded understanding of the Holocaust and the factors leading up to its implementation,” said Hillel education chair Jeffrey Camras, a junior from Skokie, Ill.

A play, Lida Stein and the Righteous Gentile — presented by the Anne Frank Theater Project of the Philadelphia Holocaust Awareness Museum and Education Center — centered on a Jewish teen hidden by her best friend’s family. While the friend’s mother tutors Lida, her once best friend becomes a staunch Hitler supporter and turns against her.

The discussion that followed, led by museum facilitator John Walton, focused on the gradual intimidation and segregation of the Jewish community and the motivations and consequences for both friendly and hostile German youth and adults.

Camras said that last Yom Hashoa, Hillel presented the feature film Defiance, about partisans who carry out acts of revenge against the Nazis.

“We got a lot of backlash,” said Camras. “A lot of people thought it was inappropriate for Yom Hashoa.”

This year’s new format was funded by the David and Fela Shapell Family Foundation. It was cosponsored by the university’s Allen and Joan Bildner Center for the Study of Jewish Life; the Catholic Center; Canterbury House (Episcopalian); the Wesley Fellowship (Methodist); the fraternities Alpha Epsilon Pi and Sigma Alpha Mu, which are based on Jewish values; and the Cabaret Theatre in New Brunswick.

The Rev. Ellen Little, director of the Wesley Fellowship, told NJJN she had a personal reason for wanting to be part of the program.

“I didn’t even know about the Holocaust until I was in high school,” she said. “I grew up in Ohio, and no one knew anything about it. I asked my parents why I had not heard anything in history class. Ever since I’ve been very aware that while we’ve condemned Germany, there are an awful lot of blind people out there, and it can happen again.

“Hillel has been very good about making us aware without beating us over the head,” said Little. “We want to make sure people never forget.”

Adam Nachman of East Brunswick, representing Rho Upsilon, the Rutgers chapter of AEPi, said he went on the March of the Living last year, which impressed on him the importance of teaching future generations.

He said that Rho Upsilon would be one of 130 chapters across the country participating in the “Unto Every Person There is a Name” program later that evening, reading aloud the names of Shoa victims. On May 2, members participated in a Walk of Remembrance down College Avenue.

Tuck, a member of Shir Ami Bucks County Congregation in Newtown, Pa., was just 10 when the Nazis invaded Poland in 1939. Weeks later he and his family were deported to the Lodz Ghetto. In 1941, he was sent to the Posen labor camp. After it was liquidated in 1943, Tuck was sent to another labor camp, where he was assigned to help build the Autobahn. Trained as a mechanic, he later worked in a sub-camp of Auschwitz building anti-aircraft guns before being sent to Mauthausen in Austria and then finally to Gusen.

During his more than five years in the camps, Tuck developed typhoid fever but, he told the audience, “I dare not tell anyone I had a temperature or I’d be killed.”