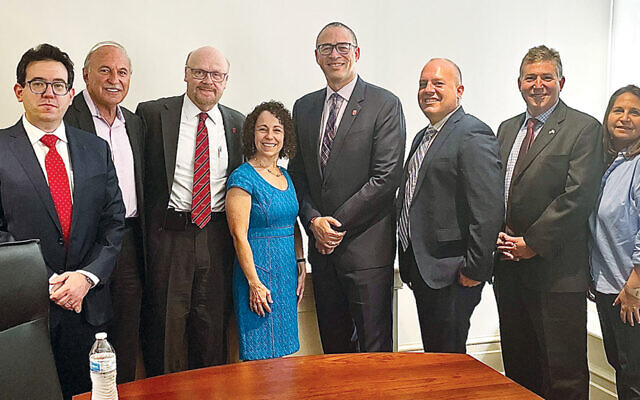 It’s not every day that you get a 45 minute meeting with the president of a university, who is responsible for more than 70,000 students.

But then again, it’s not every day that top leaders of such a university manage to make fools of themselves while trying simultaneously to condemn anti-Semitism and not to offend strident anti-Israel groups.

That’s what the leaders of Rutgers University did last month, when they first condemned anti-Semitism, then appeared to apologize for being insensitive to Palestinians in so doing, and finally issued a statement denying that they had apologized and reiterating that “At Rutgers we believe that anti-Semitism, anti-Hinduism, Islamophobia and all forms of racism, intolerance and xenophobia are unacceptable wherever and whenever they occur.”

“It was a positive conversation,” Jason Shames, CEO of the Northern New Jersey federation, said about the meeting.

“There was a bit of an apology and acknowledgment that the Rutgers processes and procedures had failed,” Mr. Shames said. “President Holloway is new — he’s been there about a year — and for the most part has been operating remotely. He was caught off guard by how quickly things escalated and got out of hand in terms of who gets to make statements. He made a mistake and he was honest that he made a bit of a mistake.

“I can’t say that he made me feel better about their perceived capitulations to Students for Justice in Palestine, which I think is like a terrorist group on campus.”

The first 10 minutes of the meeting was spent discussing the statements. During the rest of the time, the Jewish representatives talked about what they saw as the problems facing Jews at Rutgers and on other campuses.

“Jewish kids are being harassed and intimidated, and it’s a one-way street, and it has to stop,” Mr. Shames said he told Dr. Holloway. “You don’t see movements from the Jewish community attack Muslims and Palestinians on campus and intimidate them. The bottom line is that there is no equivalency to how the Palestinians and their supporters conduct themselves and how we Jews conduct ourselves.

“To the best of my knowledge, there are no incidents of Jews on campus threatening Palestinians. You don’t see Jews throwing firecrackers or punching Palestinians. It’s time for Rutgers and the world to see that.

“We talked about how we represent 500,000 Jews in the State of New Jersey, and have a vested interest in feeling Jews can attend Rutgers and not feel they can’t wear a yarmulke or support Israel. If you want to create a campus environment where hate isn’t tolerated, Jews deserve to be at the table with every other group who is targeted. It’s no different than racism. Jews can’t be marginalized, and we don’t want to be the only ones sitting at the table talking about why we’re the target.

“I would like to see the university step up. They said they were at the beginning of their fact-finding Jewish mission tour.”

That same day, Dr. Holloway visited the Rutgers Chabad House and met with its rabbis and administrators.

“We agreed that the division of student affairs needed to be more invested in making sure that Jews on campus feel more welcome on campus,” Mr. Shames said. “They will follow up with new measures.”

“It’s clear that President Holloway is very much in favor of deeper engagement with the Jewish community, which we welcome and appreciate,” Dov Ben-Shimon, CEO of the Greater MetroWest federation, said. “It’s troubling for us in the Jewish community that there are significant anti-Zionist dynamics on campus. It was very important for us that the president heard that many Jewish students are being barred from progressive spaces.”

Mr. Ben-Shimon was unable to make the meeting; he was represented by Linda Scherzer, director of the federation’s Community Relations Committee, who, like one other attendee, was teleconferenced in; everyone else was there in person.

“We urged President Holloway to reject any attempt to connect anti-Semitism in this country to the Israeli-Palestinian conflict 3,000 miles away,” Ms. Scherzer said. “Would Rutgers qualify its support for Asian Americans because of China’s actions against the Uyghurs? Would Rutgers withhold allyship with its Muslim community because of Saudi bombings of Yemen? To create such a linkage for American Jews is applying a double standard not used for any other people or faraway conflict.”

Meanwhile, the group of allied New Jersey federations, along with the local chapters of the Anti-Defamation League and the American Jewish Committee, have collected signatures for a statement against anti-Semitism.

The list of signatories is headed by New Jersey Governor Phil Murphy, and it includes “over 60 interfaith clergy and presidents of NAACP chapters across the state,” Ms. Scherzer said.

“It’s a pretty great effort. A combined effort of all of us to reach out to our respective contacts and get their names on board. We pulled this together pretty quickly — it started maybe the week before last.

“Names are still coming in— it’s a living document, people can sign on line,” she said. Only one person she reached out to refused to sign.

“Often people will say, where are our partners and our allies? I think they are out there, but often they need to be asked.