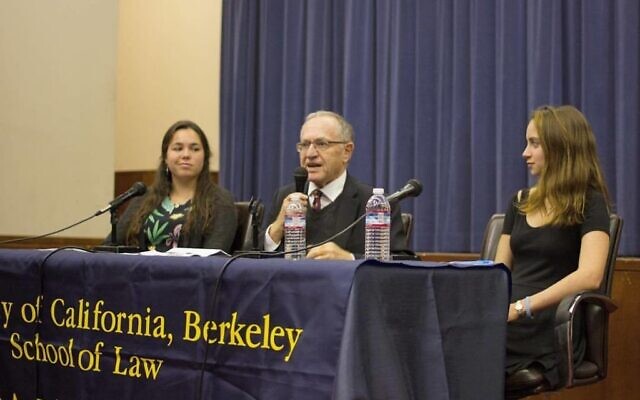 Alan Dershowitz speaks at UC Berkeley about the liberal case for Israel. Courtesy of Adeh Forer

It’s a joke about optics. As a Jew and a Zionist, Dershowitz proudly supports Israel. As an attorney, he defends the seemingly indefensible and the profoundly unpopular.

Do most people understand the difference, or will they lump in Israel with Dershowitz’s unsavory or polarizing clients?

This week’s cascade of headlines made me think about the continuing erosion of Israel’s public image — by which I mean on the middle and the left. The pro-Israel right and evangelical Zionists were thrilled by the Trump peace “vision” released last week. It appeared to offer embattled Israeli Prime Minister Benjamin Netanyahu everything he wanted, especially in that it gives Israel a green light to apply Israeli law over territory that much of the international community considers illegally occupied. The East Room at the White House was filled with Jewish supporters who have long backed the settlement movement, starting with the U.S. Ambassador to Israel, David Friedman. Christians United for Israel, which calls itself the nation’s largest pro-Israel organization, called it the “best peace proposal any American administration has ever put forth.”

If some of the dependably right-wing Jewish groups were a little muted in their statements, it was because in addition to recognizing what Netanyahu called “Israel’s sovereignty over areas in Judea and Samaria that are vital to our security and central to our heritage,” the plan still leaves open a path to a
Palestinian state.

Left-wing groups were unsurprisingly dismissive of the plan, calling it a “cynical ploy” (Jewish Labor Committee), “unbalanced” (New Israel Fund), and “an Orwellian exercise in doublespeak in which one side gets to talk about peace and two states while actually carrying out a plan that will ultimately end with a single state between the Jordan River and the Mediterranean Sea” (Israel Policy Forum).

The left-right divide on the future of Israel, the Palestinians, and two states is nothing new. But never has the divide in America on the issue been so politically partisan. Republicans were ecstatic over the plan. Democrats, at least the ones who didn’t ignore it, were deeply critical. Senators Bernie Sanders (I-Vt.), Elizabeth Warren (D-Mass.), and Amy Klobuchar (D-Minn.) all signed onto a Democratic statement saying, “Unilateral implementation of this one-sided proposal will risk eliminating any remaining prospects for achievement of a peaceful and viable two-state solution.”

And remember the timing: The proposal dropped in the middle of Trump’s impeachment trial, at a moment when the country’s seemingly unbridgeable political differences were on full display. For moderates and liberals, the trial is a reminder of all the reasons they revile Trump; for Republicans, all the ways the Democrats have tormented their flawed but effective president. Change the channel and there is Trump, with a beaming Netanyahu at his side, calling him “the greatest friend that Israel has ever had in the White House,” adding “it’s not even close.”

Elation on the right, nausea on the left.

Look, I am not saying who is wrong or right here. Maybe the Democrats are deluded about a two-state solution, or they are right that the plan is one-sided and ludicrous. But the giddy announcement of the plan at the White House, with Netanyahu unable to suppress a wide grin through most of the proceedings, seemed only to cement the idea that Israel is a Trump thing. And if any moderates or liberals remained undecided about Israel, the optics of the day may have made their decision easier: If Trump is for it, they must be against it.

Some of this falls under the category of “Trump Ruins Everything.” Whether you are a fan of his or not, we have never seen a president so divisive and consistently unpopular, and so unwilling to reach beyond his impassioned base. There have been other unpopular presidents, but I don’t think there has been a major announcement on the Israeli-Palestinian conflict without members of both parties in the room.

The left wing of the Democratic party, by demonizing Israel, also shares a lot of the blame for this deeply partisan divide over the conflict. Israel can’t control that, not with the world’s greatest “hasbarah,” nor by making one-sided concessions of its own to please the left. That’s certainly not the inclination of the Israeli public, as two elections and counting have demonstrated.

For years, pro-Israel lobbyists warned about making Israel a partisan issue. They warned that parties swap power, and that your “best friend” today may one day be out of office, so you had better cultivate friendships on both sides of the aisle and make sure Israel remains above the partisan fray.

That quaint idea is over. Republican Jews are rejoicing that their party is viewed as the “pro-Israel” party. They are looking to win elections. But the Republicanization of the pro-Israel agenda — and especially its Trumpification — is ominous, as is the rise of Democratic candidates willing to pander to the far left on Israel.

I don’t have a solution here, except maybe to suggest that Netanyahu get control of his smile muscles. The Trump era may last another five years, but it won’t last forever. Perhaps the next president will be strongly pro-Israel while trying to elevate the issue above sharply partisan considerations. Or perhaps he or she will be as polarizing as Trump, and throw Israel under the bus to please a pro-Palestinian base. The latter scenario was once unthinkable; the former seems increasingly unlikely.

Andrew Silow-Carroll is editor in chief of The New York Jewish Week, NJJN’s sister publication. He served as NJJN editor for 13 years.