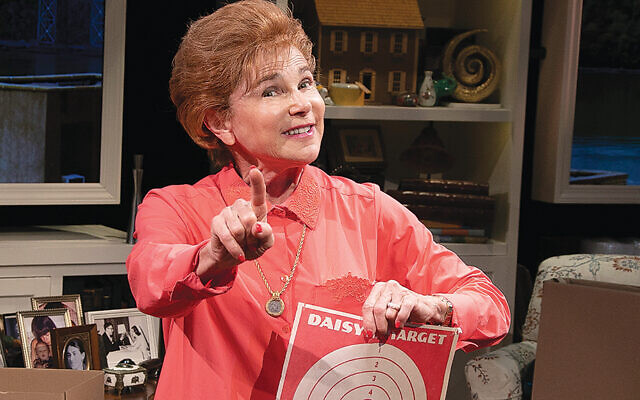 Six-time Tony- and Emmy Award-nominated actor Tovah Feldshuh has returned to the stage in New York City after eight years. She’s starring in “Becoming Dr. Ruth,” a one-woman show, written by Mark St. Germain. It is presented Off-Broadway at the Edmond J. Safra Hall at the Museum of Jewish Heritage – A Living Memorial to the Holocaust in Manhattan.

The limited-run show runs through Sunday, January 2. Two performances will be followed by onstage talkbacks with Dr. Ruth Westheimer and Tovah Feldshuh on December 15 and 22, after the 7 p.m., performances.

The production—presented on the same stage as National Yiddish Theatre Folksbiene’s smash hit Fiddler on the Roof in Yiddish—will have a runtime of 90 minutes with no intermission and be performed in compliance with current New York State health and safety requirements for indoor performances.

Jack Kliger, the museum’s president and CEO added, “We are excited to welcome audiences back for the first live theatrical production since we upgraded our theater with new lighting, sound, and other technological improvements to provide a stellar experience. Audiences are in for a treat when Tovah returns to the stage in New York City after eight years as the inimitable Dr. Ruth Westheimer. This is a performance not to be missed!”

“Becoming Dr. Ruth” chronicles the life of noted psychologist Dr. Ruth Westheimer, from her early years fleeing Nazi Germany, living as an orphan in Switzerland, to her service in the Israeli armed forces as a sharpshooter, and her later life and career in New York. Dr. Ruth’s journey against so many odds led her to become a pioneer in the psychology of human sexuality and the world’s most famous sex therapist.

Tickets now on sale at www.mjhnyc.org.