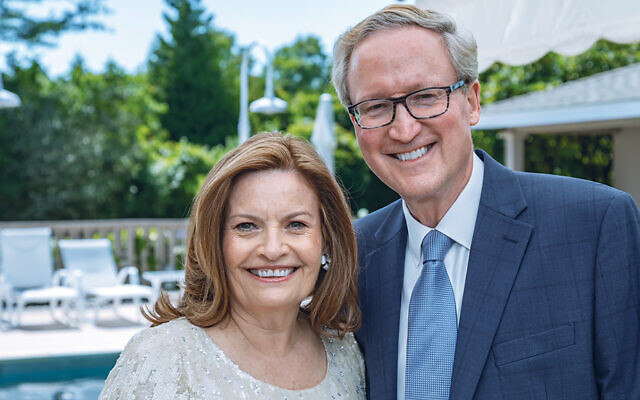 A weekend of celebration and tribute in honor of Rabbi Alan Silverstein, the religious leader of Congregation Agudath Israel in Caldwell, will be held from June 11 to 13.

Rabbi Silverstein is retiring after serving the Conservative synagogue for 42 years.

On Friday, June 11, from 4:30 to 5:30 p.m., a drive-through CAI Celebration Parade in the synagogue parking lot will give congregants an opportunity to offer a personal farewell to Rabbi Silverstein.

The next day, in-person Shabbat services in honor of Rabbi Silverstein’s wife, Rita Silverstein, will begin at 9 a.m. A “shmooze” with the rabbi in the synagogue courtyard from 12:45 to 1:45 p.m., will follow.

On Sunday, June 13, 10-11:30 a.m., a ceremony will dedicate the Rabbi Alan Silverstein Center for Prayer, Jewish Life and Learning at the synagogue.

Rabbi Silverstein has held many leadership roles in the Conservative movement; he’s been president of the International Rabbinical Assembly, president of the World Council of Conservative/Masorti Synagogues, and chair of the Foundation for Masorti Judaism in Israel. He’s now president of Mercaz Olami. The books he has written include “It All Begins With A Date: Jewish Concerns About Intermarriage” and “Preserving Jewishness in Your Family After Intermarriage Has Occurred.”

Among the hallmarks of Rabbi Silverstein’s four decades in Agudath Israel’s pulpit are furthering the role of women in ritual life; increasing the diversity and quantity of the synagogue’s religious, cultural, and educational programs; and forging strong relationships with clergy and institutions of other faiths.

As Agudath Israel enters its centennial year, Rabbi Silverstein is succeeded by Rabbi Ari Lucas, who has been its assistant rabbi since September 2018.