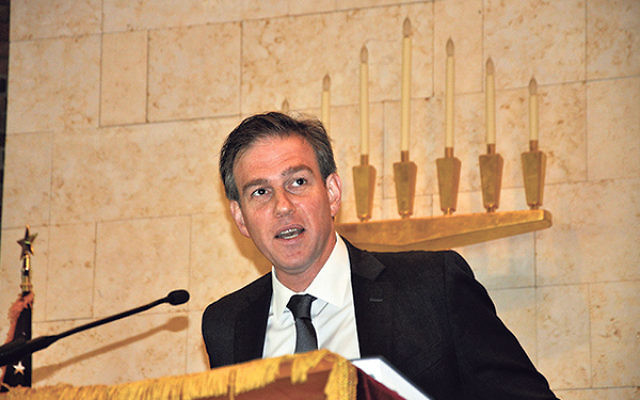 Bret Stephens said that in Europe, “One of the staggering things to me was to see how raw, how rank the anti-Semitism was.”

A Pulitzer Prize-winning Wall Street Journal columnist says that in France and other Western European countries, “anti-Semitism is masquerading as anti-Zionism.”

Bret Stephens, author, most recently, of America in Retreat: The New Isolationism and the Coming Global Disorder, points a finger at Europeans who argue that the increasing numbers of attacks on Jews there represent “misdirected but fundamentally justified anger that is a function of what Israel is or isn’t doing.”

But, he said, referring to the killings at a Jewish grocery store in Paris in January, those victims were “simply shopping for Shabbat dinner, not carrying out Israeli policies.”

Stephens, the deputy editor of the Journal’s editorial page and a former editor of the Jerusalem Post, presented “Israel, Iran, and Global Jihad” May 3 at Congregation B’nai Israel in Rumson; he will be the featured speaker at a luncheon at Green Brook Country Club in North Caldwell on Wednesday, May 20.

Stephens noted, for example, that a few weeks before the Paris attacks, the French parliament voted by an overwhelming majority to symbolically recognize a Palestinian state — what Stephens described as “the response to Israel reacting in self-defense to attacks from territory [in Gaza] unilaterally vacated by Israel 10 years ago.”

“We need to be clear that the problem…is not at the extremes [of European society]; it is at the center trickling down to the extremes.”

While living in Brussels and writing about the European Union for the WSJ from 1999 to 2002, he observed something similar: “One of the staggering things to me was to see how raw, how rank the anti-Semitism was, from people who worked at the European Commission — the high priests of Europe….”

Stephens also connected the rising tide of anti-Semitism in Europe to the ideology of radical Islam, which does not recognize such “core values” as freedom of speech, religious pluralism, separation of religion and state, and women’s and minority rights.

Young men and women are joining the self-proclaimed Islamic State, Stephens suggested, in part because of its maximalist agenda. “A caliphate has no borders, makes absolute political claims to every single Muslim wherever he or she may be, and has universalist aspirations. It will continue to grow until you destroy it — not contain it, hurt it, bomb it, pinprick it,” he said, in a nod to what he saw as indecisive statements and actions by President Obama and others. “It is going to be a fundamental and existential threat to us.”

Stephens said he shared Israeli Prime Minister Benjamin Netanyahu’s objections to the framework agreement on Iran’s nuclear program. The United States and its allies are “telling them, ‘We trust you’ — to a regime that has been cheating for 10 years.”

As to whether Israel should take matters into its own hands, Stephens noted that in the past when Israel has acted militarily against the wishes of an American president, as in the 1967 war, relations between the two countries only grew stronger in the aftermath.

“Israel’s goal should not be to earn the world’s love, but to command the world’s respect, irrespective of whether there is love or not,” Stephens said.